Hotels and Other Public Buildings: The Petersen House 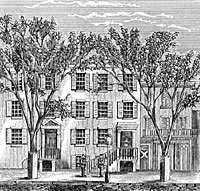 The dying moments of President Lincoln 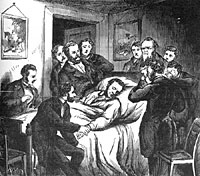 After he was shot, the President was carried across 10th Street to a boarding house owned by William A. Peterson. In his diary entry the next day, Benjamin B. French recalled that he went “up to the house where the President lay, He was surrounded by the members of his cabinet, physicians, Generals, members of Congress, etc. I stood at his bedside for a short time. He was breathing very heavily, & I was told, what I could myself see, that there was no hope for him. I then went into a room where Mrs. Lincoln and Robert were, surrounded by ladies, none of whom, except Miss Kinney, were known to me. I took Mrs. Lincoln by the hand, and she made some exclamation indicating the deepest agony of mind. I also shook hands with Robert, who was crying audibly. I saw a few moments, when I left the room, and was asked to get into the President’s carriage, then at the door, and go for Mrs. Secy. Welles, & Mrs. Doct. [Phineas Gurley]. I did so. Mrs. Welles was not up, & a lady at the house said she was too unwell to go, so I returned to the carriage, but, before we could get away someone said from the upper window that Mrs. Welles would go. I returned to the house and waited for her to dress and take a cup of tea & some toast, & then the carriage took us round to the President’s House – I, supposing she was to go there and be ready to see Mrs. Lincoln when she should get home. She thought I was mistaken, and that she was to go to 10th Street. So I remained, and she went on. I staid at the President’s a short time, directing that the house be kept closed, etc., and then came home and ate a very light breakfast. At nine, I again started in my own carriage with Ben and we drove up. We entered the gate very soon after the President’s remains were taken in, and I went immediately to the room where they were and saw then taken from the temporary coffin in which they had been brought there. I went in, at the request of someone, to see Mrs. Lincoln. She was in bed, Mrs. Welles being alone with her. She was in great distress, and I remained only a moment. I then gave all the directions I could as to the preparations for the funeral, and staid till between 11 & 12, when my head ached so badly that I had to come home.1

James Tanner, a disabled soldier who was a War Department clerk, lived in the house next door to the Petersen home. He returned to his room after an evening at Grover’s Theater: “I went up to my room on the second floor and out on the balcony which nearly over-hung the door of Mr. Petersen’s house,” wrote Tanner. From that vantage point, he observed the arrival of Washington’s leaders and learned that Mr. Lincoln’s condition was hopeless. When Edwin Stanton decided to take testimony about the shooting, Tanner was summoned because of his shorthand skills: “I went down, and the General passed me in, as the house was strictly guarded of course. I went into a room between the rear room and the front room. Mrs. Lincoln was in the front room, weeping as though her heart would break. In the back room lay His Excellency breathing hard, and with every breath a groan. In the room where I was were Generals Halleck, Meiggs [sic], Augur and others, – all of the Cabinet excepting Mr. Seward – Chief Justice Chase, and Chief Justice Carter [sic] of the District of Columbia, Andrew Johnson and many other distinguished men. A solemn silence pervaded the whole throng. It was a terrible moment. Never in my life was I surrounded by half so impressive circumstances.”

Tanner was put quickly to work: “Opposite me, at the table where I saw writing, sat writing, sat Secretary Stanton writing despatches to General Dix and others, and giving orders for the guarding of Ford’s and the surrounding country. At the left of me was Judge [David Cartter] propounding the questions to the witnesses, whose answers I was jotting in Standard Phonography.” Cartter had a tendency to stuttered. As chairman of the Ohio delegation to the 1860 Republican National Convention, it was his stuttered announcement of switched votes which had secured the nomination for Mr. Lincoln.

“In fifteen minutes I had testimony enough down to hang Wilkes Booth, the assassin, higher than ever Haman hung. I was writing short hand for about an hour and a half when I commenced writing it out. I thought I had been writing about two hours, when I looked at the clock and it marked half past four. A.M. I commenced writing about twelve, M.,” Tanner later reported. “In the front room Mrs. Lincoln was uttering the most heart broken exclamations all the night long. As she passed through the hall back to the parlor after she had take leave of the President for the last time – as she went by my door, I hard her moan, ‘Oh, My God, and have I give my husband to die?’ and I tell you, I never hard so much agony in so few words. The President was still alive but sinking fast.”

“At 6:45 Saturday morning I finished my notes and passed into the back room where the President lay. It was very evident that he could not last long. There was quite a crowd in the room, which was small, but I approached quite near the bed on which so much greatness lay, fast losing its hold on this world. The head of the bed was towards the door. At the head stood Captain Robert Lincoln, weeping on the shoulder of Senator Sumner. General Halleck stood just behind Robert Lincoln and I stood just to the left of General Halleck and between him and General [Montgomery Meigs]. Stanton was there, trying every way to be calm and yet he was very much moved. The utmost silence pervaded, broken only by the sounds of strong men’s tears,” Tanner wrote a friend a few days later.2

Mr. Lincoln died there in a back bedroom at 7:22 the next morning. “Oh, my God, and have I given my husband to die?” asked his wife, who had spent most of the night in an adjoining room.3 “Now he belongs to the ages,” intoned Secretary of War Edwin Stanton.4 Over two years before, Harriet Beecher Stowe, had met with President Lincoln at the White House. “Whichever way it ends, I have the impression that I sha’n’t last long after it’s over,” Mr. Lincoln told the author of Uncle Tom’s Cabin.5