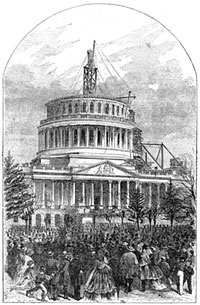 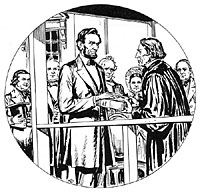 Mr. Lincoln’s First Inauguration on March 4, 1861 took place on a cold but sunny day on the Capitol’s east front and under the Capitol’s unfinished dome. Mr. Lincoln’s official day began at Willard’s Hotel, where he had been staying. A parade preceded the inauguration itself According to journalist Ben Perley Poore, “The procession was a very creditable one, the United States troops and the District Militia making a fine show, with the Albany Burgess Corps, and a few organizations from a distance. Mr. Lincoln rode with President Buchanan, and, on arriving at the Capitol, entered the Senate Chamber leaning on the old gentleman’s arm. After Mr. [Hannibal] Hamlin had taken his oath of office as Vice-President, and several new Senators had sworn in, a procession was formed, as usual, which repaired to the platform erected over the steps of the eastern portico of the Capitol. When Mr. Lincoln came out he was easily distinguished as his tall, gaunt figure rose above those around him.1

Former Senator Hamlin’s remarks were remarkable in their brevity: “The experience of several years in this body has taught me something of the duties of the presiding officer, and with a stern, inflexible purpose to discharge these duties faithfully, relying upon the courtesy and cooperation of Senators, and invoking the aid of Divine Providence, I am now ready to take the oath required by the Constitution, and to enter upon the discharge of the official duties assigned me by the confidence of a generous people.”2 After some brief formalities, Hamlin, President Buchanan and President-elect Lincoln left the Senate chamber for the outdoor inaugural ceremonies.

Carl Schurz, who served as both a diplomat and general in the Lincoln Administration, recalled the scene: “I saw Lincoln step forward to the desk upon which the Bible lay – his rugged face, appearing above all those surrounding him, calm and sad, but so unlike any other in that distinguished assemblage that one might well have doubted how they could work together. I saw Senator Douglas standing close by him, his defeated antagonist, the ‘little giant’ of the past period, who, only two years before, had haughtily treated Lincoln like a tall dwarf. I witnessed the remarkable scene when Lincoln, about to deliver his inaugural address, could not at once find a convenient place for his hat, and Douglas took that hat and held it like an attendant, while Lincoln was speaking. I saw the withered form of Chief Justice [Roger B.] Taney, the author of the famous Dred Scott decision, that judicial compend of the doctrine of slavery, administer to oath of office to the first President elected on a distinct anti-slavery platform. I saw, standing by, the outgoing President, James Buchanan, with his head slightly inclined on one side, and his winking eye, and his white neck-cloth – the man who had done more than any other to degrade and demoralize the National Government and to encourage the rebellion, now to retire to an unhonored obscurity…”3 Describing the preparations for the inaugural address, journalist Lawrence A. Gobright wrote: “Mr. Lincoln, after a short pause, laid down his manuscript for a few moments on the table; then thrusting his hand into his pocket, took from it a pair of steel-bowed spectacles, which he placed carefully and deliberately on his nose, and used his goldheaded cane as a paper-weight during the reading of the Inaugural.”4

Iowa Republican Charles Aldrich remarked on the clarity and strength of Mr. Lincoln’s unamplified speech: “When he concluded he stepped to one side of the table upon which lay an apparently well-worn copy of the Bible. The oath of office was administered by Chief Justice Taney – the President kissing the Bible – after which the people who occupied the platform and steps arose and slowly filed into the Capitol. The address was already printed and was at once upon the streets. I know that it was as profoundly satisfying to the people present, as it was to the loyal people of the whole country.”4