Other Government Buildings: The State Department 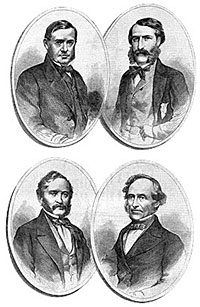 The State Department was located in a smaller and unimpressive brick building just North of the Treasury Building along Pennsylvania Avenue. (It was torn down after the Civil War to accommodate a north wing for the Treasury Department.) The President was more likely to visit Secretary of State William H. Seward at his nearby home facing Lafayette Park. Even more frequently, Seward himself came to the White House to talk to the president.

William Howard Russell, a correspondent for the London Times, recorded his impressions of his first visit to Seward’s headquarters: “It is a very humble – in fact, dingy – mansion, two stories, high, and situated at the end of the magnificent line of colonnade in white marble, called the Treasury, which is hereafter to do duty as the headquarters of nearly all the public departments. In a moderately sized, but very comfortable, apartment, surrounded with bookshelves, and ornamented with a few engravings, we found the Secretary of State seated at his table, and enjoying a cigar; he received me with great courtesy and kindness, and after a time said he would take occasion to present me to the President, who was to give audience that day to the minister of the new kingdom of Italy, who had hitherto represented the kingdom of Sardinia.”1

“The State Department of 1861 was not the huge organization that it is today. Its home since 1820 had been an old, two-story brick building, drab in color but with a front portico of six white columns,” wrote Seward biographer Glyndon Van Deusen. “This edifice stood on the corner of Fifteenth Street and Pennsylvania Avenue, where the northern wing of the Treasury Department stands today. Its thirty-odd rooms housed the diplomatic bureau proper, a consular bureau, a home bureau, a keeper of the archives, a disbursing agent, and a commissioner of patents, all save the last being supervised by the chief clerk of the Department. The two rooms occupied by the Secretary of State were on the northeast corner of the second floor, just across the hall from those of the chief clerk and the Assistant Secretary.”2

By 1864, the Treasury Department needed the space occupied by the aging State Department building. Presidential aide William O. Stoddard wrote in an anonymous newspaper dispatch: “Preparations are being made for the demolition of the old State Department building, and for the completion of the north wing of the Treasury building, whose magnificent proportions will thus include rather more ground, is addition to the present structure, than is now occupied by the old ‘grey brick.’ There are many associations connected with that (for America) ancient and modest-looking affair on the corner by the President’s house. Webster, and Marcy, and a long list of our distinguished names, have by turns ruled in its shabby halls and offices, and from there have sent out documents to determine peace or war, and influence the destiny of nations and races. No doubt, future history will unearth strange things from the musty piles of documents stored away in those dusty archives.”3

In addition to handling foreign crises, the State Department had to handle foreign diplomats in Washington. According to Secretary of the Interior John P. Usher, “Mr. Lincoln was not well versed in the amenities of life; but I assure you that whenever foreign ambassadors were to meet Mr. Lincoln, Mr. Seward was careful that he should make no mistakes and should appear to the very best advantage. When a foreign minister was to be Mr. Lincoln, Mr. Seward always suggested to him in advance, what he should say, where he should stand, and how he should act. He was a man who would do all that, when the nation was in a manner dissolved.”4

Seward himself had to preside over a large block of patronage appointments, for which many Republicans hungered. According to historian Harry J. Carman and Reinhard H. Luthin, “The numerous consulships in Europe, the Americas, and Asia proved to be virtual life-savers to Lincoln in caring for those who had been loyal to the party. It was apparent that these positions abroad were ardently sought by those who desired travel in foreign lands and by those who were disappointed in their quest for other positions.”5

As The Stranger’s Guide-book to Washington City reported in 1864: “An unpretending brick building, in the same enclosure with the President’s house, but northeast of it. And on the corner of Pennsylvania avenue and Fifteenth street, is occupied by the Department of State. It is two stories high above the basement, the latter being built of freestone. The length of the building is 160 feet; width 55 feet. Broad passages run the entire length of the building on both floors, and on either side are the offices of the Secretary and Assistant Secretary of State, and of the clerks and other employes of the Department. The library of books, maps and charts in this building is immense, and number over 15,000 distinct works. Copies of all works copyrighted in this country are also carefully preserved in this Department, and the volumes number at this time 12,000 or 14,000. In this unpretending building is transacted all the business of the Government with foreign countries. The original of the Declaration of Independence, and other papers of historic note and interest to American citizens, may all be seen here.”6