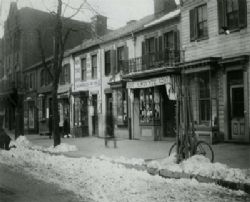 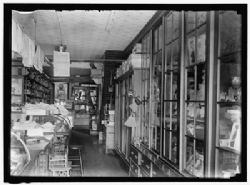 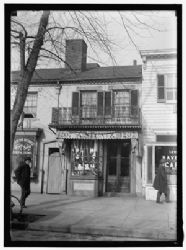 President Lincoln liked to take walks with his young son Tad. Among their destinations was the toy shop owned by Joseph Stuntz and later his widow Apolonia in a small two-story brick row house at 1207 New York Avenue, NW, just a few blocks from the White House.

According to Lincoln scholar Charles Lachman, Stuntz “was a retired French soldier who carved wooden toy soldiers in a tiny back room.”1 According to historian Allen Clark, “Mr. Lincoln came to the modest emporium to buy toys for his son ‘Tad’ – tin and wooden soldiers in bright colors with guns and the soldiers’ captains with swords; and cannon and everything else to arrange in peaceful miniature in counterpart to the terrible things of savage war.”2 On one visit, Lincoln reportedly asked Stuntz: “Does it hurt you as much to have your soldiers shot down as it does me to have mine?”3

After the death of the Lincolns’ son Willie in February 1862, Lincoln was particularly solicitous of Tad’s happiness. “I want to give him all the toys I did not have,” said Lincoln of Tad, “and all the toys that I would have given the boy [Willie] who went away.”4

Stuntz’s also featured a “penny counter” where children could invest in sweets. After Apolonia’s death in 1901, the Washington Post reported: “Mrs. Stuntz made a specialty of her penny counter for the young ones. On this counter she exhibited an almost unbelievable number of wondrously beautiful articles – some to eat and others to behold and to fondle — for a penny. The young ones of the days long ago would line up with wide eyes in front of those windows and play ‘choosins,’ whether they had the requisite penny or not. Sometimes it would take actual hours for those who had wheedled pennies out of the parents to decide how to invest the same.”5