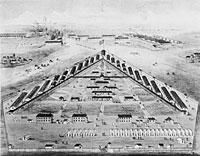 Campbell General Hospital, located at Florida Avenue and 7th Street several miles north of the White House, was one of nearly three dozen military hospitals in Washington. By 1864, journalist Noah Brooks observed: “All Washington [was] a great hospital for the wounded in the great battle now going forward in Virginia. Boatloads of unfortunate and maimed men are continually arriving at the wharves and are transported to the various hospitals in and around Washington in ambulances or upon stretchers, some of the more severely wounded being unable to bear the jolting of the ambulances…There are twenty-one hospitals in this city and vicinity and every one of them is full of the wounded and the dying.”1

The city, noted novelist Harriet Beecher Stowe, “was one great hospital of wounded soldiers; the churches, the public buildings all filled with the maimed, the sick and suffering…”2 Journalist Brooks wrote in 1862: “There are now in this city a little more than twenty hospitals located in various buildings; some in churches, public halls the Patent Office, and other public buildings, and many in temporary wooden structures which have been put up for this special purpose. It is one of the new and hitherto unknown features of our military experience, which has been developed in this war, that we should suddenly be obliged to provide for thousands of sick and wounded men, to arrange for a partial assuaging of their pains upon the field, to remove them to a place of security and rest, to make provision for medical and surgical treatment, and to surround them with such means and appliances of comfort as shall ameliorate their unfortunate condition. Whatever may be said about the mismanagement of the medical staff upon some of the battlefields, I am glad to be able to say that, thanks to the persistent and thorough inspections of the Sanitary Commission and the public visitations to hospitals in this vicinity, no just foundation for complaint exists in any of the general hospitals.”3

Laura Wood Roper, biographer of Frederick Law Olmsted, general secretary of the United States Sanitary Commission wrote: “Branching out [in 1861], the commission decided to do something about the hospitals around Washington crowded with wounded from Bull Run. It was not enough to remedy, as it did, the deficiency of supplies and services – to provide such necessities as nursing, bedding, nightshirts, medicines, and invalid foods, which the Medical Bureau had inertly proposed and miserably failed to furnish after the need for them arose. The hospitals themselves were makeshifts – seminaries, hotels, warehouses – ill adapted to their new use, incapable of accommodating any great influx of wounded, and as often as not, badly run. Van Buren and Agnew undertook to inspect all the hospitals in the Washington area, preparatory to drawing up plans to replace them with new pavilion hospitals for fifteen thousand patients. At about the same time. Olmsted began to organize storage depots in large cities, where specified supplemental hospital supplies, of a sort government did not furnish, could be collected for shipments to points where they were needed on order from the Washington headquarters.”4

Campbell was typical of the hospitals visited by Mary Todd Lincoln to bring small gifts and food to wounded soldiers, except it had a theater where entertainment was presented nightly to the patients. Mary wrote the mother of one soldier hospitalized at Campell Hospital after falling ill with fever on the Richmond front in the summer of 1864: “I am sitting by the side of our soldier boy. He has been quite sick, but is getting well. He tells me to say to you that he is all right.”5

Mr. Lincoln also liked to visit soldiers in army hospitals. “Unannounced, he might simply appear in a ward to talk with the men in their cots. ‘I can’t stay, boys,’ he said in one hospital where he rapidly went from ward to ward. ‘I hope you are all comfortable and getting along nicely here.’ When time allowed, he went to each bed, shaking hands with every soldier in turn,” wrote historian William C. Davis. “What he saw often left him shocked and horrified. His friend and companion [Ward Hill Lamon] sometimes saw the president disturbed ‘almost beyond his capacity to control either his judgment or his feelings.'”6

“An army surgeon told how Lincoln once visited a hospital in Washington and afterward stopped to chat with the doctors. One of these was telling about a difficult operation just performed, in which, a wounded soldier’s arm had been removed at the shoulder joint, and he went into much technical detail, the other doctors listening intently,” wrote historian Bruce Catton. “At last, as he finished , and the others were asking this and that about the operation, Lincoln burst out with the one question that interested him, the one question which no doctor had thought to ask: ‘But how about the soldier?'”7

The surgeon in charge of the Judiciary Hospital was Charles Taft, half-brother of Julia Taft, a frequent visitor to the White House in the first year of Mr. Lincoln’s Administration. She reported:

The President and Mrs. Lincoln visited the hospital quite often, bringing fruit and flowers, and Charlie said it always cheered the men. Mr. Lincoln wrote to Hiram Barney in New York:
‘Mrs. Lincoln has $1000 for the benefit of the hospitals and she will be obliged and send the pay if you will be so god as to select and send her $200 worth of good lemons and $100 worth of good oranges.’
Mrs. Lincoln distributed this fruit to the different hospitals and Judiciary Square had its share.8

One day, Julia told Mr. Lincoln how she read to soldiers at the Judiciary Square Hospital and he asked her: “Does it make you sad, seeing all those wounded men?” She replied that she thought “everybody will be sad until the war is over.” Responded the President: “Yes, Julie, I think they will.”9

The hospitals were sometimes part of the afternoon rides taken by Mr. & Mrs. Lincoln. One observer noted: “Mr. Lincoln’s manner was full of the geniality and kindness of his nature. Wherever he saw a soldier who looked sad and ‘down-hearted,’ he would take him by the hand and speak words of encouragement and hope. The poor fellows’ faces would lighten up with pleasure when he addressed them, and he scattered blessings and improved cheerfulness wherever he went.”10

After the May offensive, Washington was inundated with casualties from the Army of the Potomac. Historian Charles Bracelen Flood wrote: “Steamboats with names like Lizzie Baker, Connecticut, and General Hooker, their whistles blaring in harsh ghostly tones, landed at the Sixth Street wharves in downtown Washinngton, where long lines of horsedrawn ambulances waited to take the wounded to Washington’s twenty-one overcrowded hospitals.”11

John Wilkes Booth learned that President Lincoln was supposed visit wounded soldiers at Campbell General Hospital for a performance of Still Waters Run Deep on March 17, 1865 and arranged an ambush. “With an hour’s notice, according to John Surratt, the gang raced out waited until they saw a carriage approach. Riding alongside, they saw the man in the vehicle was not Lincoln. It may have been Salmon P. Chase, the Chief Justice of the Supreme Court, who did attend the show,” wrote historian Robert H. Fowler. President Lincoln had changed his schedule and greeted a group of Indiana soldiers instead. He never showed up — thus postponing his assassination for nearly a month.12

Hearing that soldiers at Carver Hospital had voted for McClellan, Lincoln told Secretary of War Stanton: “That[‘]s hard on us Stanton…they know us better than the others.”

One of those who assisted in the hospitals was poet Walt Whitman. Whitman biographer Roy Morris Jr. observed: “Like the soldiers who filled them, the hospitals in Washington were a variable lot. They ranged in size and richness of appointment from the private mansions of Douglas Hospital to the filthy, mud-encrusted tents of the contraband camp on the outskirts of town. At the start of the war, patients had been housed indiscriminately in churches, taverns, jails, schoolrooms, stables, hotels, warehouses, and homes; many had been left out in the open in vacant lots. The ensuing two years had witnessed a boom in hospital building, although the new facilities were far from standardized. The three-thousand-bed Harewood Hospital, constructed on a rolling farm northwest of the city, was modeled after an English estate, with landscaped grounds, terraced flower gardens, and a well-tended vegetable plot. By contrast, the hastily built Lincoln Hospital consisted of rough canvas tents stretched across wooden frames on the marshy flood plain east of the Capitol. State-of-the-art hospitals included Armory Square and Judiciary Squared, which had been constructed on the modern ‘pavilion plan’ that featured separate wards, or pavilions, radiating from a central corridor. The new pavilion hospitals, based on the British design first used in the Crimean War, emphasized open air and ample ventilation.”13