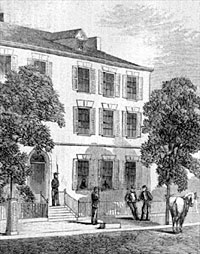 When he headed the army, George McClellan maintained a separate headquarters in the home of Charles Wilkes at 19th Street and Pennsylvania Avenue. Offices were maintained on the first floor and living quarters on the second. Historian Doris Kearns Goodwin wrote: ”The parlors downstairs were occupied by the telegraph office, with dozens of staff ‘smoking, reading the papers, and writing.’”1

War correspondent Charles Carlton Coffin recalled how President Lincoln learned of the death of his friend Edward D. Baker at the Battle of Ball’s Bluff on October 21, 1861:

The Army of the Potomac was in camp on Arlington Heights, and at Alexandria McClellan was having his weekly reviews. There was much parade but no action. ‘All quiet on the Potomac,’ sent nightly by the correspondents to their papers, had become a by-word. The afternoon was lovely – a rare October day. I learned early in the day that something was going on up the Potomac near Edwards’ Ferry, by the troops under General [Nathaniel Banks]. What was going on no one knew, even at McClellan’s head-quarters. It was near sunset when, accompanied by a fellow-correspondent, I went once more to ascertain what was taking place. We entered the anteroom and sent our cards to General McClellan. While waiting, President Lincoln came in, recognized us, reached out his hand, spoke of the beauty of the afternoon, while waiting for the return of the young lieutenant who had gone to announce his arrival. The lines were deeper in the President’s face than when I saw him in his own home, the cheeks were more sunken. They were lines of care and anxiety. For eighteen months he had borne a burden such as has fallen upon few men – a burden as weighty as that which rested upon the great law-giver of Israel.
‘Please to walk this way,’ said the lieutenant.
We could hear the click of the telegraph in the adjoining room, and low conversation between the President and General McClellan, succeeded by silence, excepting the click-click of the instrument, which went on with its tale of disaster.
Five minutes passed, and then Mr. Lincoln, unattended, with bowed head, and tears rolling down his furrowed cheeks, his face pale and wan, his heart heaving with emotion, passed through the room. He almost fell as he stepped into the street, and we sprang involuntarily from our seats to render assistance, but he did not fall. With both hands pressed upon his heart he walked down the street, not returning the salute of the sentinel pacing his beat before the door.
General McClellan came a moment later. ‘I have not much news to give you,’ he said. ‘There has been a movement of troops across the Potomac at Edwards’ Ferry, under General Stone, and Colonel Baker is reported killed. That is about all I can give you.”2

McClellan had a disdain for anyone in authority over him although he demanded absolute discipline from those under him. In his letters and conversations, he often referred to the president as the “gorilla.” On August 16, 1861, shortly after he was appointed to lead the Army of the Potomac, McClellan wrote his wife: “…I am here in a terrible place – the enemy have from 3 to 4 times my force – the Presdt is an idiot, the old General in his dotage – they cannot or will not see the true state of affairs. Most of my troops are demoralized by the defeat at Bull Run, some [regiments] even mutinous – I have probably stopped that – but you see my position is not pleasant.”3

McClellan managed to drive General Winfield Scott from his position of army chief of staff by the end of October. John Hay later recalled how President Lincoln delivered the news of McClellan’s elevation to head all Union forces. “The night of 1st November we went over to McClellan’s. The General was there and read us his general order in regard to Scott’s resignation & his own assumption of command. The President thanked him for it and said it greatly relieved him. He added, “I should be perfectly satisfied if I thought that this vast increase of responsibility would not embarrass you.” “It is a great relief, Sir. I feel as if several tons were taken from my shoulders today. I am now in contact with you, and the Secretary. I am not embarrassed by intervention.” “Well,” says the Tycoon, “draw on me for all the sense I have, and all the information. In addition to your present command, the supreme command of the Army will entail a vast labor upon you.” “I can do it all,” McC. said quietly.”4

McClellan’s arrogance exceeded his manners. Count Adam Gurowski recorded an entry in November 1861: “Officers of McClellan’s staff tell that Mr. Lincoln almost daily comes into McClellan’s library, and sits there rather unnoticed. On several occasions McClellan let the President wait in the room, together with other common mortals.”5 Julia Taft recalled an occasion when President Lincoln, his son Willie and Julia’s brother Bud had been at McClellan’s headquarters waiting for the general. When McClellan arrived, an orderly said: “The President is in the parlor waiting for you, general.” Instead of entering the parlor, McClellan marched upstairs, took off his boots and laid down on his bed. After waiting for McClellan to come back downstairs, the President announced, “Come, boys, let us go home.”6 Even naval officer David Dixon Porter was astonished by McClellan’s impertinence. When McClellan insisted on keeping President Lincoln waiting while he conferred with Porter, the general said of the President: “He has no business to know what is going on.”7

Official and public impatience with McClellan grew throughout the fall as he continued to drill Union troops but failed to make any serious moves to engage the enemy. When McClellan fell ill in December, the President sought other ways to get the army to move and began consulting other generals at the White House.

The President was not the only dignitary whom McClellan kept waiting. When Edwin M. Stanton took over as secretary of war in January 1861, he quickly encountered McClellan’s imperious ways. Stanton biographer Frank Abial Flower wrote: “McClellan’s headquarters were on Jackson Square, where he held a ‘levee’ with his staff at 10 every morning and another at 9 every night. He was preparing to hold one of these fantastic functions when Stanton’s card was sent up, but continued to dawdle with his aides, orderlies, and other satraps, thus keeping his distinguished caller in waiting the fuller hour required for this tawdry nonsense. General [Stewart] Van Vliet says Stanton was very much incensed and inquired ‘what sort of a commanding general the country had.”8

According to historian Allan Nevins, “The arrogant ways of Little Mac grated upon [Stanton’s] sense that the cause was everything, the individual nothing. Soon after he took office he called unexpectedly at McClellan’s headquarters, and the general kept him waiting. His secretary, A.E. H. Johnson, reports his furious comment: ‘That will be the last time General McClellan will give either myself or the President the waiting snub.”9 According to Stanton aide Albert E. H Johnson, “In a few days Mr. Stanton ordered the telegraph to be removed from McClellan’s headquarters to the War Department, at the same time detaching from his staff his chief operator, then Captain [Thomas] Eckert, who afterwards became president of the Western Union Telegraph Company.”10

McClellan returned to his Washington headquarters after the Peninsula Campaign and the disastrous Second Battle of Bull Run. On September 2, 1862, President Lincoln and General Henry W. Halleck held their third meeting within twenty fours with McClellan at the headquarters. Conspicuously absent was Edwin Stanton who wanted to remove McClellan from all authority. Mr. Lincoln had already given McClellan command of Washington’s defenses. President Lincoln, according to McClellan, told him on the morning of September 2 “that the troubles now impending could be overcome better by me than anyone else…I only consent to take [command] for my country’s sake & with the humble hope that God has called me to it – how I pray that he may support me.” President Lincoln announced his decision at a noon Cabinet meeting in his office – to the near-unanimous consternation of his Cabinet members, who had lost faith his McClellan’s military leadership. The President understood their concerns about McClellan and told John Hay that the Union general “has acted badly in this matter, but we must use what tools we have.”11

One final time on September 5, Halleck and Mr. Lincoln visited McClellan at his headquarters. “General, you will take command of the forces in the field,” President Lincoln told McClellan. Later that day, he wrote his wife: “….Again I have been called upon to save the country – the case is desperate, but with God’s help I will try unselfishly to do my best & if he wills it accomplish the salvation of the nation. My men are true & will stand by me to the last. I still hope for success & will leave nothing undone to gain it…”12 As McClellan reorganized the Army of the Potomac, the soldiers marched north to Maryland through the capital. Ernest B. Furgurson wrote in Freedom Rising: Washington in the Civil War, “On Saturday evening, September 6, 20,000 soldiers cheered as they trooped by McClellan’s house on H Street, accompanied by sixty cannon. This was a departure from the familiar tradition of soldiers cheering the president as they marched along Pennsylvania Avenue past the White House. They were heading west toward Frederick, responding to news that Lee had crossed the Potomac above Washington, invading Maryland and aiming at Pennsylvania.”13