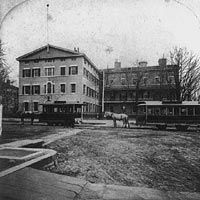 A few weeks after he took office, President Lincoln was prevailed upon by the commandant of the Navy Yard to attend the wedding of his daughter. The President met his social obligation, but the commandant, Franklin Buchanan, did not meet his. Shortly thereafter, Buchanan defected to the Confederacy. At the wedding, however, Mr. Lincoln met Commodore John A. Dahlgren, an ambitious navy officer who became Mr. Lincoln’s unofficial naval adviser. It was therefore to the Navy Yard that Mr. Lincoln often went for military information and relaxation.

Indeed, President Lincoln was not a frequent visitor to the Navy Department. He did not have the same kind of easy relationship with Secretary of the Navy Gideon Welles that he did with Secretary of War Edwin SM. tanton. “I have administered the Navy Department almost entirely independent of Cabinet consultations, and I may say almost without direction of the President, who not only gives me his confidence but intrusts all naval matters to me. This has not been my wish. Though glad to have his confidence, I should prefer that every important naval movement should pass a Cabinet review.”1 On one visit to the Navy Department in April, 1863, he told Assistant Navy Secretary Gustavus V. Fox and Dahlgren: “Well, I will go home; I had no business here; but, as the lawyer said, I had none anywhere else.”2

The stuffy Welles usually had to go to the White House to see the President; he was probably the most faithful Cabinet member in attendance at Cabinet meetings. To Welles’ exasperation, Mr. Lincoln had a tendency to deal with Assistant Secretary Fox or Navy Yard commander Dahlgren on many naval matters. “As a matter of course the secretary and assistant secretary consulted the president when undertaking major operations, but Lincoln rarely intervened in naval affairs, in sharp contrast to how he handled the War Department,” Dalhgren biographer Robert J. Schneller observed.3

One night early in the war, according to biographer Ida Tarbell, a Navy Department clerk was working late when he was interrupted by “some one striding up and down the hall muttering: ‘I do wonder if they have gone already and left the building all alone.’ Looking out, the clerk was surprised to see the President. ‘Good evening,’ said Mr. Lincoln. ‘I was just looking for that man who goes shooting with me sometimes. The clerk knew that Mr. Lincoln referred to a certain messenger of the Ordnance Department who had been accustomed to going with him to test weapons, but as this man had gone home, the clerk offered his services. Together they went to the lawn south of the White House, where Mr. Lincoln fixed up a target cut from a sheet of white Congressional note-paper. ‘Then pacing off a distance of about eighty or a hundred feet,’ writes the clerk, ‘he raised the rifle to a level, took a quick aim, and drove the round of seven shots in quick succession, the bullets shooting all around the target like a Gatling gun and one striking near the centre.'” The President then adjusted the gun’s sight with his own self-whittled sight addition and improved his shooting considerably.4

Presidential aide William O. Stoddard related one visit of President Lincoln to the Navy Department to meet with navy officials regarding the construction of the first ironclad “monitor.” “A number of naval officers and other experts were assembled to sit in judgment, and the President listened patiently and silently to their successive expressions of opinion. These were almost unanimously given adversely to the practicability of the plan of vessel proposed. Finally, Rear Admiral Smith, chairman of the Naval Board in charge of the matter, turned to the President and asked him what he thought of it. ‘Well,’ said Mr. Lincoln, ‘I feel about it a good deal as the fat girl did when she put her foot into her stocking. She thought there was something in it.'”5

On August 30, 1862, Welles became the center of a cabinet intrigue to pressure President Lincoln to terminate George McClellan as a Union army commander. Welles’ diary is an important source of information about department and administration affairs. The next day, he recorded how Secretary of the Treasury Salmon P. Chase approached him:

Yesterday, Saturday, P.M., when about leaving the Department, Chase called on me with a protest addressed to the President, signed by himself and Stanton, against continuing McClellan in command and demanding his immediate dismissal. Certain grave offenses were enumerated. Chase said that Smith had seen and would sign it in turn, but as my name preceded his in order, he desired mine to appear in its place. I told him I was not prepared to sign the document; that I preferred a different method of meeting the question; that if asked by the President, and even if not asked, I was prepared to express my opinion, which, as he knew, had long been averse to McClellan’s dilatory course, and was much aggravated from what I had recently learned at the War Department; that I did not choose to denounce McC. for incapacity, or to pronounce him a traitor, as declared in this paper, but I would say, and perhaps it was my duty to say, that I believed his removal from command was demanded by public sentiment and the best interest of the country.
Chase said that was not sufficient, that the time had arrived when the Cabinet must act with energy and promptitude, for either the Government or McClellan must go down. He then proceeded to expose certain acts, some of which were partially known to me, and others, more startling, which were new to me. I said to C. that he and Stanton were familiar with facts of which I was ignorant, and there might therefore be propriety in their stating what they knew, though in a different way,– facts which I could not indorse because I had no knowledge of them. I proposed as a preferable course that there should be a general consultation with the President. He objected to this until the document was signed, which, he said, should be done at once.
This method of getting signatures without an interchange of views with those who are associated in council was repugnant to my ideas of duty and right. When I asked if the Attorney-General and Postmaster-General had seen the paper or been consulted, he replied not yet, their turn had not come. I informed C. that I should desire to advise with them in so important a matter; that I was disinclined to sign the paper; did not like the proceeding; that I could not, though I wished McClellan removed after I had heard, and should have no hesitation in saying so at the proper time and place and in what I considered the right way. While we were talking, [Postmaster General Montgomery] Blair came in. After Chase left me, he returned to make a special request that I would make no allusion concerning the paper to Blair or any one else.6

Soon thereafter, the President himself returned McClellan to full command of the Army of the Potomac – much to the consternation of most of the Cabinet.

The Navy itself would continue to expand from its pre-war strength — which historian Craig L. Symonds observed “was feeble even by the prewar standards of a peacetime republic.”7 There was considerable jealousy among top naval officers regarding promotion and compensation from seizure of “prizes, but in one way the navy caused President Lincoln less trouble than did army officers Symonds note that “there was no maritime counterpart to the contingent of so-called political generals that caused Lincoln so many difficulties during the war.”8