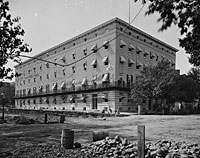 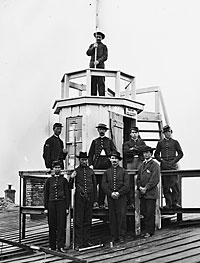 The Winder Building Annex to the War Department was located across 17th Street; it was the five-story headquarters of General Winfield Scott and later General Henry W. Halleck, the offices of Quartermaster General Montgomery Meigs, as well as the Army Ordnance Department and several other Army bureaus. Scott moved his headquarters from New York to the Winder building in December 1860 when it appeared that a secession crisis was imminent.

It was here that President Lincoln came on January 10, 1862 and complainedto General Meigs about the inaction of the Army of the Potomac and the illness of its commander: “General what shall I do?1 The people are impatient; Chase has no money and he tells me he can raise no more; the General fo the Army has typhoid fever. The bottom is out of the tub. What shall I do?” In response, Meigs advised the President to convene a meeting of army leaders.

It was here in Halleck’s office on September 1, 1862 that President Lincoln asked General George B. McClellan to assume command of the Union Army’s defense of Washington after the General John Pope’s defeat at the Second Battle of Bull Run.

President Lincoln frequently visited the Winder Building because of his interest in testing weapons for the Union Army. The President took an active interest in the new weapons — in part because the Chief of Ordnance, General James W. Ripley, thought the war would not last long enough to justify experimenting with untested weapons which would have to be put into mass production. President Lincoln, for example, pushed Ripley to use balloons for army intelligence. Eventually, Ripley’s deliberate obstruction of the use of breach-loading and repeating rifles led to his replacement by Colonel George D. Ramsey. Robert Bruce, author of Lincoln and the Tools of War, observed:

“Across Seventeenth Street from the small, brick War Department stood the ‘Northwest Executive’ or Winder Building, where the Army Ordnance Department had its headquarters during the Civil War. The Winder Building (pronunciation as in “stem-winder”) was a plain, boxlike, brick structure five stories high, with marble facing on the basement and a plaster coating over the remainder. In Lincoln’s time the double doors of its main entrance opened onto the pavement – not, as now, onto a flight of stone steps – and there was an iron grillwork balcony along the second floor which made a convenient reviewing stand when soldiers of the Union paraded down the dusty street below. Otherwise, the Winder Building stands today [in 1957] with much the same face it first presented to Washingtonians when Zachary Taylor lived in the White House across the street.”

“To find the Chief of Ordnance during the Civil War, a visitor climbed a wide, iron staircase to the second floor, where he found himself in a dark and dingy hallway–‘a disgrace to any public office,’ wrote the Chief of Ordnance one day in 1864, shortly after President Lincoln had paid him a visit. In cloudy weather the hall was so murky that the office numbers were scarcely distinguishable, and if brighter weather revealed them it exposed also the places where paint had worn or peeled away from the grimy work. Not until the last year of the war was the corridor brightened by fresh paint on the woodwork and frosted glass in the office doors. From the hallway the visitor entered a room with a cold, stone floor and an arched ceiling, a room crowded with desks and bookcases, gun models, ledgers and papers, clerks, officers and probably a disgruntled inventor or contractor. That was the office of the Chief of Ordnance.2