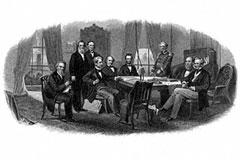 Over two thousand persons entered the White House after President Lincoln’s inauguration on March 4, 1861 to attend the Lincolns’ first reception. Hundreds more departed in frustration before they reached the door. Many more left in frustration, according to a journalist who reported: “The last scene of the Levee was a tragic one. The mob of coats, hats, and caps left in the hall had somehow got inextricably mixed up and misappropriated, and perhaps not one in ten of that large assemblage emerged with the same outer garments they wore on entering. Some thieves seem to have taken advantage of the opportunity to make a grand sweep, and a very good business they must have done.”1

Four years later, Mr. Lincoln gave a second inaugural reception after his Second Inauguration. This time, a reporter wrote: “At eight o’clock the gates were thrown open, when the grand rush was made by at least two thousand persons to gain entrance to the building, and the hustling and jolting was terrific. Some of the more unfortunate females who were caught in the surging mass, actually shrieked in pain, while several fainted and were carried away. It was impossible to let all into the Mansion at once, but at each opening of the doors the same scenes were renewed, and after parties did get into the vestibule, some of them presented a doleful appearance indeed, with dresses or coats a good deal the worse for the mess.”2

In the four years between March 1861 and 1865, many politicians, generals, journalists, job seekers and relatives of Mrs. Lincoln passed through the doors of the White House. Although the commotion was seldom as great as following President Lincoln’s inaugurations, these visitors took a great toll on the building and its principal resident. There was seldom any respite from the demands of those seeking a promotion, a policy change, or a pardon. On those rare occasions where it turned out that the visitor was seeking nothing, Mr. Lincoln reacted with relief and pleasure.

Mrs. Lincoln’s relatives alone were a tribe of trouble. Half of them were Confederate sympathizers or Confederate combatants. Two half-sisters with Confederate husbands sought trading concessions. It seemed like the rest of the Todds were looking for jobs. Two of Mary Todd Lincoln’s brothers-in-laws got financial positions with the federal government. Her cousins sought positions as postmasters. One cousin with whom she was close, John Todd Stuart, later recalled: “Mary had a very violent temper, but she had more intellectual power than she has generally be[en] given credit for.”3

No friendship was too old to be recognized. Three colleagues from Sangamon County with whom Mr. Lincoln had served on the Illinois legislature in the 1830s got jobs. So did William Greene, Jr., with whom Mr. Lincoln had clerked in a general store after he left home at 21. Mr. Lincoln’s former political and legal colleagues had their own ambitions. Two of them – Orville Browning and David Davis – vied to be appointed to the Supreme Court. Several others received other judicial appointments.

More serious were the demands of cabinet members, congressmen, state politicians and who regularly sought the President’s approval for their agendas. Even among his cabinet members and generals, agendas often conflicted. Orville Browning reported to his diary a visit on July 16, 1864 which reflected such disputes: “Called at the Presidents and spent an hour. Among other things he showed me a letter from Genl [Henry Halleck] to [Secretary of War Edwin Stanton] demand that [Postmaster General Montgomery Blair] should be dismissed from the cabinet for saying the officers in command in Washington were poltroons for permitting the rebels to blockade the City and burn private residents almost under our guns. It was sent by Stanton to the President – He read me the letter and his reply, in which he said he should be the sole judge of when, and for what to dismiss a cabinet officer.”4

The qualities of President Lincoln that all visitors encountered are revealed in a letter written by Samuel G. Suddarth, a state military official in Kentucky. After visiting the White House’s East Room, Suddarth and his colleagues “were conducted up to the Presidents Sanctorm or business room, where to our surprise and gratification all further formality was laid aside. Mr. Lincoln shook us cordially by the hand and received us in so natural and unostentatious a manner, and with that kind of unaffected, plain, and native urbanity, as to dispel all embarrassment, and cause us to feel entirely easy. His conversational powers are fine – and his custom of interspersing his conversations with incidents, anecdotes and witticisms are well calculated to impress his hearers with the kind heartedness of the man. And they are so adroitly and delicately mingled in the threat of his discourse that one hardly notices the digression. His language is good though not select, yet very strong pointed and forcible, though never harsh. His sentences exceedingly short though full and complete. Whatever may be said of some of his political notions, history will record him as one of the most remarkable men of modern times. He is dignified in his manners and addres [sic], without austerity. Self poysed [sic] and clear in his perceptions.”5