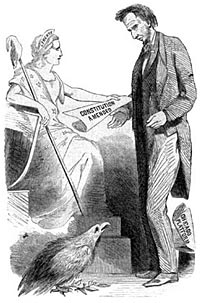 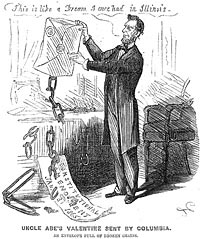 Illinois attorney Leonard Swett said he spoke to President Lincoln in October 1863 about a constitutional amendment to abolish slavery: “I told him …I believed the result of this war would be the extermination of slavery; that Congress would pass the resolution; and that it was proper at that time to be done. I told him if he took that stand, it was an outside position and no one could maintain himself upon any measure more radical, and if failed to take the positions, his rivals would. Turning to me suddenly he said, ‘Is not that question doing well enough now?’ I replied that it was. ‘Well’, said he, ‘I have never done an official act with a view to promote my own personal aggrandizement, and I don’t like to begin now, I can see that time coming; whoever can wait for it, will se it – whoever stands in its way, will be run over by it.'” 1

On January 1, 1864, Illinois Congressman Isaac Arnold paid a New Years Day call on Mr. Lincoln. According to Arnold’s biography of Mr. Lincoln: “After congratulating the President on the great victories which had been achieved in the East and the West, and the brightening prospects of peace, [Arnold] said:

‘I hope, Mr. President that on next New Year’s day I have the pleasure of congratulating you on three events which now seem very probable.”

“First, That the war may be ended by the complete triumph of the Union forces.

“Second, That slavery may be abolished and prohibited throughout the Union by an amendment of the Constitution.

“Third, That Abraham Lincoln may have been re-elected President.”

“I think,” replied he, with a smile, “I think my friend, I would be willing to accept the first two by way of compromise.” 2

That month Missouri Senator John B. Henderson introduced a joint congressional resolution to abolish slavery. Illinois Senator Lyman Trumbull, as chairman of the Senate Judiciary Committee, introduced a substitute constitutional amendment: “Neither slavery nor involuntary servitude, except as punishment for crime, whereof the party shall have been duly convicted, shall exist within the United States, or any place subject to their jurisdiction.” Republicans who had hoped to abolish slavery with simple congressional action finally lined up behind Trumbull’s amendment. It passed the Senate on April 8 by a vote of 38-6, but failed in the House on June 15 because it attracted only four Democratic votes Trumbull biographer Ralph J. Roske noted that President Lincoln “remained on the sidelines while the constitution amendment was before the Senate. He was indifferent to its wording and felt confident that an amendment would be passed by the staunchly-Republican upper chamber. After the Senate approved the amendment, Lincoln vigorously backed it in the struggle in the House of Representatives.” 3

Despite the amendment’s failure in the House, President Lincoln was helping lay the groundwork for its eventual passage. War Department official Charles A. Dana recalled:

I order thus to amend the Constitution, it was necessary first to have the proposed amendment approved by three-fourths of the States. When that question came to be considered, the issue was seen to be so close that one State more was necessary. The State of Nevada was organized and admitted into the Union to answer that purpose. I have sometimes heard people complain of Nevada as superfluous and petty, not big enough to be a State; but when I hear that complaint, I always hear Abraham Lincoln saying, ‘It is easier to admit Nevada than to raise another million of soldiers.’ 4

Republican dissidents meeting in Cleveland on May 30 1864 included in their platform support for a constitutional amendment abolishing slavery. “When the regular Republicans met in convention the following month, Lincoln was aware of the need for winning the dissidents back to the party fold,” wrote historian Richard N. Current. “He called to the White House the chairman of the Republican National Committee, Senator [Edward D. Morgan] and gave him instructions for his speech opening the convention. ‘Senator Morgan,’ he is reported to have said, ‘I want you to mention in your speech when you call the convention to order, as its keynote, and to put into the platform as the keystone, the amendment of the Constitution abolishing and prohibiting slavery forever.’ Senator Morgan did as the President wished.” 5

The platform contained the pro-amendment language and the President’s reelection in November 1864 laid the groundwork for its final passage. Rather than waiting for a new Congress to take their seats, President Lincoln appealed to the Congress that had already rejected the amendment. In his last message to Congress in December 1864, President Lincoln wrote:

On January 6, 1865, debate began in the House Representatives on the Thirteenth Amendment. President Lincoln became actively involved in the effort to find votes for the Amendment. “This time, the Radicals could scarcely oppose him, and so the amendment offered him the rare opportunity to seize the initiative from them. But resistance could certainly be anticipated from Northern Democrats and border-state hold-outs. So, the secretaries were sent on their usual discreet embassies to unsure congressmen, while the more truculent border-staters were brought to the White House for personal interviews with the president,” noted historian Allen C. Guelzo,. ‘The greatest measure of the nineteenth century,’ remarked the canny Thaddeus Stevens, ‘was passed by corruption, aided and abetted by the purest man in America.'” 7

The President’s involvement was not easy. One proposal would have delayed a railroad bill in New Jersey in return for some votes which otherwise would have been cast against the amendment. Congressman James M. Ashley approached presidential secretary John G. Nicolay in an effort to get Senator Charles Sumner, a backer of the railroad bill, to agree to a postponement. According to historian Roy M. Basler, “When Nicolay told Lincoln of Ashley’s proposal, the President replied, ‘I can do nothing with Mr. Sumner in these matters. While Mr. Sumner is very cordial with me, he is making his history in an issue with me on this very point. He hopes to succeed in beating the President so as to change this Government from its original form and make it a strong centralized power.’ Then calling Mr. Ashley into the room, the President said to him, ‘I think I understand Mr. Sumner; and I think he would be all the more resolute in his persistence on the points which Mr. Nicolay has mentioned to me if he supposed I were at all watching his course on this matter.'” 8 Lincoln biographer Carl Sandburg wrote:

“One of the largest slaveholders in Missouri, James S. Rollins, several times consulted with the President about the proposed Constitutional amendment. Rollins heard Lincoln in early January: ‘This is my chief hope and main reliance to bring the war to a speedy close, and I have sent for you as an old Whig friend to come and see me, that I might make an appeal for you to vote for this amendment. It is going to be very close. A very votes one way or the other will decide it.”
Rollins’ response was quick. The President didn’t need to send for him on this matter. ‘Although I…have the misfortune to the one of the largest slave-owners in the county where I reside, I had already determined to vote for the thirteenth amendment.’ Then, as Rollins told it, ‘He arose from his chair, and grasping me by the hand, gave it a hearty shake, and said, ‘I am most delighted to hear that.” The President then asked how various Missouri Representatives stood. Rollins named those he knew to be for or against the bill. And on Rollins saying he was ‘one easy terms’ with the entire Missouri delegation, Lincoln asked if he wouldn’t talk with those who might be persuaded to vote for the amendment,’ and to report soon what was the prospect. Congressman Rollins agreed. 9

On January 31, the amendment came up for a vote and passed with the necessary two-thirds majority of those voting. “One publication declared that even up to noon the issue had been in doubt,” noted historian Allan Nevins. “The direction of the wind was indicated when applause greeted the Democrats, James English of Connecticut, and John Ganson of New York as they voted ‘aye.’ The four Democrats who had previously voted in favor did so again, to be joined now by thirteen others. In addition, eight Democrats were reported absent without pairs, a result which Lincoln’s secretaries admit was ‘perhaps not altogether by accident.'” 10

New Jersey was critical, according to Basler: “Such were the business pressures, and private personal motives, of some representatives when the historic amendment came to a roll-call vote in the House of representatives on January 31, 1865. Of the five New Jersey representatives, for example, the single Republican John f. Starr voted yea; two Democrats, Andrew J. Rogers and George Middleton, abstained; one Democrat, William G. Steele, and one Constitutional Union Party representative, Nehemiah Perry, voted nay. The Amendment passed with 119 yeas, 56 nays, and 8 abstaining. Thus the eight members not voting, including the two from New Jersey, secured the amendment’s passage.” 11 Upon passage, the House of Representatives erupted in bedlam.

“The day after the passage of the amendment, a procession with music marched to the White House and called loudly for the President. Lincoln came out on the balcony,” wrote Lincoln biographyer Benjamin Thomas. 12 The New York Tribune reported Mr. Lincoln’s comments:

The President said he supposed the passage through Congress of the Constitutional amendment for the abolishment of Slavery throughout the United States, was the occasion to which he was indebted for the honor of this call. [Applause.] The occasion was one of congratulations to the country and to the whole world. But there is a task yet before us — to go forward and consummate by the votes of the States that which Congress so nobly began yesterday. [Applause and cries–“They will do it,” &c.] He had the honor to inform those present that Illinois had already to-day done the work. [Applause.] Maryland was about half through; but he felt proud that Illinois was a little ahead. He thought this measure was a very fitting if not indispensable adjunct to the winding up of the great difficulty. He wished the reunion of all the States perfected and so effected as to remove all causes of disturbance in the future; and to attain this end it was necessary that the original disturbing cause should, if possible, be rooted out. He thought all would bear him witness that he had never shrunk from doing all he could to eradicate Slavery by issuing an emancipation proclamation. [Applause.] But that proclamation falls far short of what the amendment will be when fully consummated. A question might be raised whether the proclamation was legally valid. It might be added that it only aided those who came into our lines and that it was inoperative as to those who did not give themselves up, or that it would have no effect upon the children of the slaves born hereafter. In fact it would be urged that it did not meet the evil. But this amendment is a King’s cure for all the evils. [Applause.] It winds the whole thing up. He would repeat that it was the fitting if not indispensable adjunct to the consummation of the great game we are playing. He could not but congratulate, himself, the country and the whole world upon this great moral victory. 13

Meanwhile, President Lincoln committed a constitutional faux pas. He signed the Thirteenth Amendment – a step which wasn’t required by the Constitution since no presidential approval is necessary for an amendment to be submitted to states for ratification. On December 18, 1865, with approval by the required three-fourths of all states, the Thirteenth Amendment was ratified.