Downstairs at The White House 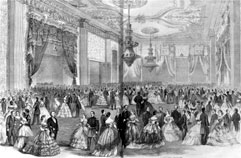 Grand Presidential Party on February 5, 1862 in the East Room

Most visitors to the White House never got beyond the first floor. Visitors to the Lincolns’ receptions on Tuesday evenings and Saturday afternoons were primarily restricted to the central hall, the Blue Room, and the East Room. It was the first floor as well that was the site of official occasions like state dinners, diplomatic ceremonies, receptions of large groups of visitors, and the occasional funeral — including Mr. Lincoln’s own.

“The day was not half spent before the house was full of office-seekers. Halls, corridors, offices and even private apartments were invaded,” noted Elizabeth Grimsley, a cousin of Mrs. Lincoln who accompanied the family to Washington in 1861. Mrs. Grimsley wrote: “This throng continued and increased for weeks, intercepting the President on his way to meals; and, strange to say, every tenth man claimed the honor of having raised Mr. Lincoln to the Presidency, until he was fain to exclaim, ‘Save me from my friends!’ The ladies of the family were not exempt from marked attention and flattery, but they soon had their eyes open to the fact that almost every stranger that approached us ‘hoped we would use our influence with the President in his behalf.’ And it was a hard matter to persuade them that they would stand a better chance without interference, we, to quote Mr. Lincoln, having no influence with this administration.”1

On a regular basis, the Lincolns used the family dining room for their meals, but during the day, Mr. and Mrs. Lincoln generally stayed away from this level of the Executive Mansion. Mr. Lincoln sometimes avoided it by using a stair that allowed him to exit the building through the basement and avoid those seeking a favor from him. At other times of the day, Mr. Lincoln might leave by the front door as he went north across Pennsylvania Avenue to visit Secretary of State William Seward’s home, went south to go to the Treasury building, or west to visit the War or Navy departments.

At night, the Red Room and the Blue Room were sometimes used for more intimate social occasions, particularly by Mrs. Lincoln, who invited respected politicians and disreputable spiritualists to visit. The focal point of major social activities, however was the large East Room. It was where visitors came to gawk during the day and guests for presidential parties conversed at night. Secretary John G. Nicolay was in charge of these affairs — to the annoyance of Mrs. Lincoln. Nicolay wrote of one of Mrs. Lincoln’s affairs in 1861: “Half the city is jubilant at being invited, while the other half is furious at being left out in the cold. It was a very respectable, if not brilliant success. Many of the invited guests did not come, so the rooms were not at all overcrowded…Those who were here (some of them having sought and almost begged their invitations) will be forever happy in the recollection…Suffice it to say that the East Room…looked very beautiful; that the supper was magnificent; and that when it was over, by way of an interesting little finale, a couple of the servants, much moved by wrath and wine, had a jolly little knock-down in the kitchen, damaging in its effects to sundry heads and champagne bottles.”2

Commissioner of Public Buildings Benjamin B. French described in his diary a regular Tuesday evening reception on March 3, 1863 and the diverse crowd it attracted: The reception was exceedingly crowded. I think I never saw such a crowd in the White House in my life, and it was a steady stream of humanity for 2½ hours of all sorts and kinds of people. Ladies in magnificent toilets and in the plainest imaginable garb. The Major coat, and boots covered with mud halfway up the leg. Every grade of every arm of the service seemed to be there, from Gen. Halleck Com. In Chief down to the private. Epaulettes & shoulder straps, cheverons, &scales were as thick as leaves in valambrosa. Citizens in all sorts of dress, from the finished & perfumed dandy down to the shabbiest of the shabby passed along & oh……as I stod at the side of ‘The Queen’ of all this show — she, herself habited as it became her in rich black satin and jewels of the richest kind. The President, too, ‘honest old Abraham,’ looked better than I ever saw him before at a reception. The whole thing passed of admirably, and by midnight I was at home and in bed.”3

Another aide, John Hay, wrote: “There was little gaiety in the Executive house during his time. It was an epoch, if not of gloom, at least of a seriousness too intense to leave room for much mirth. There were the usual formal entertainments, the traditional state dinners and receptions, conducted very much as they have been ever since. The great public receptions, with their vast rushing multitudes pouring past him to shake hands, he rather enjoyed; they were not a disagreeable task to him, and he seemed surprised when people commiserated him upon them. He would shake hands with thousands of people, seemingly unconscious of what he was doing, murmuring some monotonous salutation as they went by, his eye dim, his thoughts far withdrawn; then suddenly he would see some familiar face – his memory for faces very good – and his eye would brighten and his whole form grow attentive; he would greet the visitor with a hearty grasp and a ringing word and dismiss him with a cheery laugh that filled the Blue Room with infectious good nature. Many people armed themselves with an appropriate speech to be delivered on these occasions, but unless it was compressed into the smallest possible space it never got utterance; the crowd would jostle the peroration out of shape.”4

The President’s memory impressed historian George Bancroft when he visited a White House levee in 1863. He wrote his wife that as President Lincoln shook Bancroft’s hand he said: “Hold on– I know you; you are – History, History of the United States – Mr. – Mr. Bancroft, Mr. George Bancroft.”5

But memory could have a less helpful side. Mrs. Lincoln had no use for the Green Room after her son Willie was laid out there prior to his funeral in February 1862 Tad and Willie Lincoln, of course, had less fear of favor-seekers and roamed throughout the house, often disrupting it. Visitors brought their own disruptions and if they didn’t get beyond the first floor, sometimes took away a bit of the interior decorations. Their vandalism was conducted even during White House receptions — leading Mr. Lincoln to ask “Why should they do it?”6

Given the physical state of the White House, Mr. Lincoln might have had other security worries. “The White House that received Lincoln in 1861 was different from the house Washington had envisioned. A palace it was not. Its stone exterior might have evoked the old manor houses of England, but the interior was all American,” according to White House historian William Seale. “Wooden floors sagged in their long span; at great receptions during the Civil War years, logs were used to shore up the East Room from the basement lest the floors fall through from the moving, shifting weight of so many people”7 Mrs. Lincoln embarked on a controversial redecoration project during the year. In early December 1861 as Congress reported back into regular session, Lincoln aide William O. Stoddard wrote: “At the White House things are nearly ready for the ‘season.’ The new carpets are down, the new curtains are up, the new furniture is in, and sorely were they all needed, that the nation might not look ‘seedy and out at the elbows’ in the house of its Chief Magistrate.”8

Personal security was a continuing problem. Mr. Lincoln disdained efforts to improve it, telling fellow Illinois politician Leonard Swett: “I cannot be shut up in an iron cage and guarded. If I have business at the War Office, I must take my hat and go there, and if to kill me is within the purpose of this rebellion, no precaution can prevent it. You may guard me at a single point, but I will necessarily be exposed at others. People come to see me every day and I receive them, and I do not know but that some of them are secessionists or engaged in plots to kill me.” 9

Security was still a concern when the Lincolns sat down to their final dinner in the Family Dining Room on April 14, 1865. The President “complained of being worn out with the incessant toils of the day.” Mrs. Lincoln later told Dr. Anson Henry that she proposed cancelling their trip to Ford’s Theater “on account of a bad headache, but [Mr. Lincoln] insisted that he must go, for if he stayed at home he would have no rest for he would be obliged to see company all evening as usual. Finding that he had decided to go, she could not think of having him go without her, never having felt so unwilling to be away from him.” 10