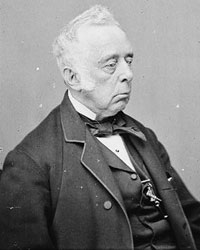 Reverdy Johnson was a Senator from Maryland (Whig, Democrat, 1845-49, 1863-68), Attorney General (1849-50) under President Zachary Taylor and Minister to Great Britain (1868-1869). A key supporter of Stephen Douglas in 1860, Johnson became a proponent of emancipation although at the outset of the Civil War, he was a pro-slavery Democrat and opposed emancipation in District of Colombia in 1862.

Johnson was a conservative Unionist who “favored moderate measures,” noted biographer Bernard C. Steiner.1 He wrote: “After Lincoln’s election and the secession of South Carolina, Johnson, without a moment’s hesitation, took his place among the foremost advocates of union and opponents of secession. That position he never left. At the close of the war, he stated that he never had referred to the Confederates but as ‘traitors, rebels or insurrectionists.’”2

Johnson’s stature as a constitutional scholar was useful to the President. “With a delegation of prominent Baltimoreans, Johnson came to Lincoln to learn if he meditated invasion of the South, and thought the contents of Lincoln’s confidential answer of April 24, that he intended merely to protect the capital, were speedily transmitted to the Confederate authorities, through Johnson’s incautiousness, yet relations of cordial support of Lincoln by Johnson were established for the time. This led Lincoln to request Johnson to answer [Roger B.] Taney’s opinion in Ex parte Merryman, as to the right of the President to suspend the writ of habeas corpus.”3 Johnson, supported President Lincoln against Chief Justice Roger Taney on the dispute over the suspension of habeas corpus. But he fought the administration on its dismissal of General Fitz John Porter after the Second Battle of Bull Run.

In the summer of 1862, Johnson served as Secretary of State William H. Seward’s representative in New Orleans to resolve diplomatic disputes over seizure of foreign property. The actions had been taken by New Orleans’ commander, General Benjamin Butler, who considered the Marylander a secessionist at heart. Butler was furious at Johnson’s interference and wrote Seward: “Another such commissioner as Mr. Johnson sent to New Orleans would render the city untenable. The town got itself into such a state, while Mr. Johnson was here, that he confessed to me he could hardly sleep for nervousness, from a fear of a rising, and hurried away, hardly completing his work, as soon as he heard Bull Run was to be attacked. The result of his mission here has caused it to be understood that I am not supported by the government and that I am soon to be relieved.”4

Johnson also complained to President Lincoln about Union policies in Louiusiana, writing on July 16, 1861: At a consultation, in which I was invited to participate, between Major Genl. Butler, Govr. Shepley, & myself, it was deemed all important that the Govr. should, at once, proceed to Washington to consult with you on the condition of this [state and] military department. The views which he will present are entirely concurred in by the Major Genl & myself, and are, as we jointly think, vital to the restoration of the State to the Union. So far[, for want, mainly,] of adequate military force, little has been done here to obtain the possession of this City, & the country, immediately surrounding it, and these even are not so secure as they should be. Whatever Union feeling (& it is said to be [to] have been extensive) there was at first in City & [state] has mainly [nearly] subsided, & [principally] from … an impression that it is the purpose of the Govt [to force the] Emancipation of the slaves. This impression grows, in a great measure from the course of Gen. Phelps, which by conduct and declaration, is calculated to [create] it; Depend upon it, my dear Sir, that unless this is at once, [corrected] this State can not be, for years, if ever, re-instated in the Union. [The presence] … of twenty or thirty thousand additional troops, at the earliest moment, is also required to hold the [state] & the City, & I trust that in both [respects,] that of slavery & troops, the views of the military authorities here, & the hopes of the Union citizens will be promply & efficiently carried out.”5 President Lincon responded:

Yours of the 16th by the hand of Governor Shepley is received. It seems the Union feeling in Louisiana is being crushed out by the course of General Phelps. Please pardon me for believing that is a false pretense. The people of Louisiana — all intelligent people everywhere — know full well, that I never had a wish to touch the foundations of their society or any right of theirs. With perfect knowledge of this, they forced a necessity upon me to send armies among them, and it is their own fault, not mine, that they are annoyed by the presence of General Phelps. They also know the remedy — know how to be cured of General Phelps. Remove the necessity of his presence. And might it not be well for them to consider whether they have not already had time enough to do this? If they can conceive of anything worse than General Phelps, within my power, would they not better be looking out for it? They very well know the way to avert all this is simply to take their place in the Union upon the old terms. If they will not do this, should they not receive harder blows rather than lighter ones?
You are ready to say I apply to friends what is due only to enemies. I distrust the wisdom if not the sincerity of friends, who would hold my hands while my enemies stab me. This appeal of professed friends has paralyzed me more in this struggle than any other one thing. You remember telling me the day after the Baltimore mob in April 1861, that it would crush all Union feeling in Maryland for me to attempt bringing troops over Maryland soil to Washington. I brought the troops notwithstanding, and yet there was Union feeling enough left to elect a Legislature the next autumn which in turn elected a very excellent Union U. S. Senator!
I am a patient man — always willing to forgive on the Christian terms of repentance; and also to give ample time for repentance. Still I must save this government if possible. What I cannot will not do; but it may as well be understood, once for all, that I shall not surrender this game leaving any available card unplayed.6

Johnson’s positions on slavery were hard to predict. He was defense counsel in the Dred Scott case, decided by the U.S. Supreme Court in 1857. But Lincoln aide William O. Stoddard reported in May 1862 after the President had signed a law ending slavery in the District of Columbia: “The little band of local slave-owners are still loud in their complaints at being ‘plundered of their property,’ and roundly assert their determination to test the Emancipation Act before the Supreme Court, with Reverdy Johnson for their counsel.”7 Johnson opposed congressional sanction of segregation on the capital’s streetcars, arguing: “If a black man proposed to ride in a first class car upon any of the railroads, where there is no State statute preventing it, he has just as much right….to be transported upon that car as a white man. There is no more right to exclude a black man from a car designed for the transportation of white persons than there is a right to refuse to transport in a car designed for black persons, white men.”8

Senator Johnson had doubts about the wisdom of black military recruitment but did not oppose it. During 1863, he was one of those Maryland politicians who quarreled with General Robert Schenck in his recruitment of Maryland slaves for the Army. John Hay recalled a visit in October 1862 by Johnson and presidential physician Robert Stone: “They think if the President will withdraw his [emancipation] proclamation the South would at once come back to the Union as soon as they could arrange the necessary machinery. Stone said if he did so he would be elected Presdt. by acclamation & Reverdy said if he did not, he was ruined.” Hay called the comments: “Blind and childish groping after a fact which has been buried.”9

Nevertheless, Johnson’s support for the 13th Amendment abolishing slavery was instrumental in helping win Senate approval in April 1864. He told the Senate in an earlier debate: “I thank God that, as compensation for the blood, the treasure, and the agony, which have been brought into our households and into yours, it has stricken, now and forever, this institution from its place among our States.”10 In the April debate, he said: “I never doubted that the day must come, when human slavery would be terminated by a conclusive effort on the part of the bondsmen, unless that other and better reason and influence which might bring it about should be successful – the mild, though powerful, influences of that higher and elevated morality which the Christian religion teaches.”11

Johnson had a distinctive and not very attractive appearance. Journalist Noah Brooks wrote “a very repellent, dishonest face he has, though it may be slander to say so. He is short, stout, round-shouldered, his white hair, a long head, pursed out lips, and a ‘cockeye,’ as the vulgar have it….He is a good lawyer, a dignified, sententious speaker, and, in the opinion of people other than General Ben F. Butler, very much of an old rat.”12

Johnson was respected in the Senate, however, according to biographer Bernard C. Steiner: “In repartee, he was quick, his memory was so sure that he could easily refute careless statements; his acuteness was so great that he saw the real point at issue and aimed directly at it, or, if he thought that he might throw his antagonists off the true scent, he ‘wandered’ into discussion of themes more or less closely related. His relations to all the members were friendly and in debate he was most courteous. However emphatic his words might be in characterizing the policy of his opponents on the hustings, in the Senate his urbanity was almost unperturbed.”13

Nevertheless, noted Steiner, Johnson came “to be an opponent of Lincoln” on many matters and “thought Lincoln, though he had done his best, yet had been largely responsible for the errors of other [military] officers through his interference.”14 Attorney General Edward Bates noted in his diary during the 1864 presidential campaign that a Washington had reported Senator Johnson’s letter to a McClellan campaign meeting: “It is not long, but more terse and pointed than his letters usually are, and is, in fact, more calculated to damage Mr. Lincoln, than any one document that I have seen.”15

Johnson later supported President Andrew Johnson on Reconstruction. President Johnson then appointed Senator Johnson as U.S. Minister to England. Johnson had been opposing counsel in McCormick patent case in which Mr. Lincoln participated. He was also counsel for Mary Surratt in the assassination conspiracy trial until he resigned over an insult to his character from the military tribunal that were acting as judges in the case.