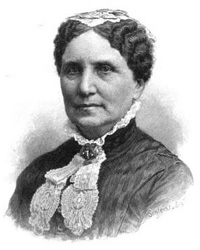 A prominent activist in the U.S. Sanitary Commission, Mary A. Livermore helped as a nurse and fundraiser. She was the wife of the editor of the Chicago-based New Covenant, a Universalist publication where she also worked as an editor and writer. She covered the nomination of Abraham Lincoln at the Republican National Convention in Chicago in May 1860.

Mrs. Livermore was one of the founders of the Chicago branch of the United States Sanitary Commission in 1862. Historian Wendy Hamand Venet noted: “Livermore’s leadership role in the Sanitary Commission expanded. In the spring of 1862 she departed on her first hospital inspection tour, visiting facilities in Southern Illinois and Missouri. She learned a great deal about the Sanitary Commission’s bureaucracy, the army’s bureaucracy, and the tragedy fo war, for she encountered badly wounded soldiers from the Battles of Fort Henry and Donelson.”1 In November 1862 Mrs. Livermore went from Chicago to Washington, where she and some colleagues visited the President:

Mrs. Livermore successfully pressed for an original of the Emancipation Proclamation be given for display and sale at the Sanitary Fair to be held in Chicago in November 1863. Wendy Hamand Venet noted: “Livermore’s efforts in planning the Northwestern Sanitary Commission Fair represented the high point of her wartime organizing and an important turning point in her emergence as an advocate for woman’s rights.”3 Mary Livermore recalled: “From the first public announcement of this fair, President Lincoln took a lively interest in it. He bore testimony again and again to its moral influence, and inquired concerning its progress of every visitant from the Northwest that found his way to the White House. We wrote with much hesitation – for we never forgot how he was shouldering the woes and cares of the country – asking for some contribution from himself to our fair. The people of the Northwest were idolatrously attached to him; and we knew that any gift from him would be prized above all price. So we urged our petition as earnestly as we knew how, and enlisted Hon. Isaac N. Arnold, of Chicago, a personal friend of Mr. Lincoln, to send our prayers in person.

“Yes,” said the President, “I must send something to that fair; but what?”A happy thought came to Mr. Arnold. ‘Why not send the ladies the original manuscript Proclamation of Emancipation? They can made a good thing of it?”

So the manuscript was shipped to Chicago where it sold for $3000. President Lincoln was again approached in March 1865 by Mary Livermore. When she and Mrs. Hoge entered his office, President Lincoln “told us laughingly, as we entered the room, that ‘he supposed he knew what we had come for. This time, ladies, I understand you have come for me.” They were indeed seeking to have the President attend the Chicago Sanitary Fair – as he had the Philadelphia Sanitary Fair in June 1864. He complained that the Philadelphia fair had not been a pleasant experience. Even before he arrived, “Everywhere there were people shouting and cheering; and they would reach into the carriage and shake hands, and hold on, until I was afraid they would be killed, or I pulled from the carriage. When we reached the fair it was worse yet.”4

They argued: “The Northwest won’t listen to your declining; and the ladies of Chicago are circulating a letter of invitation to you, which will have ten thousand signatures of women alone. The whole Northwest proposes to come to Chicago to see you and the desire is so general and urgent that you must not feel like declining.” Mr. Lincoln professed to be appalled: “Ten thousand women! What do you suppose my wife will say at ten thousand women coming after me?” When he was assured that Mrs. Lincoln had already given her seal of approval to the invitation and signaled her intent to accompany him, the President replied: “Well, I suppose that settles the matter then.” What sealed the deal what the women’s promised to “Charter a boat to take you out on Lake Michigan for a trip to Mackinaw, where the affectionate desire of the crowd to shake hands with you cannot be realized.” The President responded: “I will come! The trip on Lake Michigan will fetch me.”5 Death intervened.

Mrs. Livermore reported on her attendance at a White House evening reception during her 1865 visit: “We remained for some time, watching the crowds that surged through the spacious apartments, and the President’s reception of them. When they entered the room indifferently and gazed at him, as if he were a part of the furniture, or gave him simply a mechanical nod of the head, he allowed them to pass on, as they elected. But when he was met by a warm grasp of the hand, a look of genuine friendliness, the President’s look and manner answered the expression entirely. To the lowly and humble he was especially kind; his worn face took on a look of exquisite tenderness, as he shook hands with soldiers who carried an empty coat sleeve, or swung themselves on crutches; and not a child was allowed to pass him by without a kind word from him. A bright boy, about the size and age of the son he had buried, was going directly by without appearing even to see the President. ‘Stop, my little man’, said Mr. Lincoln, laying his hand on his shoulder, ‘aren’t you going to speak to me?’ And stooping down he took the child’s hands in his own, and looked lovingly in his face, chatting with him for some moments.”6

Mrs. Livermore also noted: “A poorly dressed, humpbacked woman approached whose face had that rare spiritual beauty often seen in connection with this deformity. Her lustrous eyes looked up almost adoringly to the Chief Magistrate, but in her humility she forebore to offer her hand. Low bowed the President to her short stature, with that heavenly look in his face…and he said something kindly in low tones to the poor cripple, that called a warm flush of gratitude to her face. It was impossible not to love the President. Awkward, homely, ungraceful, he yet found his way to all hearts, and was the recipient of more affection than any man of the nation.”7

After the Civil War, Mrs. Livermore organized the Woman Suffrage Convention in Chicago. She founded The Agitator, which she later merged into the Women’s Journal, which she edited.