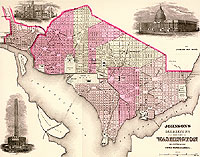 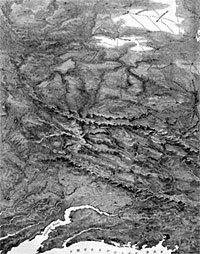 “The capital was busy, crowded and exciting; everywhere there was activity, confusion, and distress. From the North came soldiers, businessmen, politicians, and just plain people wanting to do their party or searching for loved ones, casualties of the war; from the South came deserters, spies, and the never-ending lines of wounded men, on foot, on stretchers, in ambulances – come to the city to recover, or to die; from everywhere cam adventurers, profiteers, gamblers and women of ill-reputed hoping to satisfy their lust and greed,” wrote historian Kenneth A. Bernard.1

“Before the war Washington was really a Southern city. Such permanent residents as it had were mostly with the South, and Washington society for the most part took a similar attitude toward the issue of slavery,” wrote Julia Taft, who lived in Washington and became a regular visit to the Lincoln White House.2

Presidential secretary William O. Stoddard recalled that when he arrived in Washington in February 1861 it was “little more than a great straggling village with few good-looking residences.”3 “Washington is but a ragged, unfinished collection of unbuilt broad streets, as to the completion of which there can now, I imagine, be but little hope,” wrote British novelist Anthony Trollope who visited in 1861. “Of all places that I know it is the most ungainly and most unsatisfactory: I fear I must also say the most presumptuous in its pretensions.”4

The Civil War fundamentally changed the character of the previously sleepy city – from one in which Southerners defined life politically and socially to one in which Northerners overwhelmed it and turned it into a hub of military activity. However, it was not an easy transition. Edwin Stanton, President Lincoln’s future secretary of war, wrote to General John A. Dix on June 11, 1861: “No one can imagine the deplorable condition of this city, and the hazard of the Government who did not witness the weakness and panic of the Administration and the painful imbecility of Lincoln.”5 Julia Taft wrote that by “early summer, Washington had become a great camp, with more regiments arriving daily.”6

An undertaker who was more contemporary observer said Washington was “one of the worst pestholes. Well water was often contaminated by nearby latrines; Constitution Avenue was an open sewer filled with dead animals; and the Potomac River was already so polluted that President Abraham Lincoln had become ill from eating its fish. Garbage was eaten by pigs rooting openly in the streets. Hospitals had over-flowing bedpans in the wards, and there were piles of trash on the grounds outside – no wonder that typhoid, dysentery, and malaria spread everywhere.”7

Stoddard observed that Congress was in session during the winter and so the social life of city was a naturally cold affair. “The climate is simply execrable, and the streets are unpaved, dusty or muddy, and all things conspire together to make a social triumph in the City of Magnificent Distances a well-earned and peculiar glory.”8 John Hay, Stoddard’s colleague at the White House, observed a change in the city when he wrote on November 24, 1861:

“The spirit of careless enjoyment is beginning to revive among the citizens of Washington. The gloomy aspect of distrust and apprehension is vanishing from all countenances, and the city is growing as gay, as jolly and as dissolute as in the flush times that are gone. ‘Willard’s’ is rapidly regaining its proud pre-eminence of being the most crowded, extortionate and uncomfortable caravansaries. The Avenue is enlivened with other conveyances that ambulances, and the tiresome flood of uniforms on the pave is giving way to the increasing incursions of Northern beauty and fashion. There are sounds of revelry by night in the stately mansions of the West End. There is the jingle of coin and the rattle of chips in the brilliantly lighted and grate-guarded dens, where fortunes are lost and won, at the turn of the merry pasteboard. Round, rosey and rascally, the contractors swarm at the hotels and on the sunny sidewalks, and the churches on fine Sundays are filled with the flashy silks and the baggy broadcloth of this new-born shoddy aristocracy. Public amusements, which have languished since Abraham was President, are reviving in the revival of good times, and people are finding time to laugh again.”9

Only once in the four years of the Civil War did actual warfare intrude on the District of Columbia – in July 1864. But the war was never far from President Lincoln’s mind. When he left the White House, it was often to deal with a problem connected to the war. Other problems were effectively delegated subordinates while he consulted with Secretary of War Edwin Stanton and Secretary of State William Seward.

This did not always make Mr. Lincoln’s Cabinet members happy: Secretary of the Navy Gideon Welles actually preferred more guidance from the President. On September 16, 1861, Welles confided his frustration to his diary about the assignment of Captain Charles Wilkes – only 45 days before Wilkes’ actions in seizing two Confederate officials from a British naval vessel led to a crisis in British-American relations:

I have administered the Navy Department almost entirely independent of Cabinet consultation, and I may say almost without direction of the President, who not only gives me his confidence but intrusts all naval matters to me. This has not been my wish. Though glad to have his confidence. I should prefer that every important naval movement should pass a Cabinet review. To-day, for instance, Wilkes was given the appointment of Acting Rear-Admiral, and I have sent him off with a squadron to cruise in the West Indies. All this has been done without Cabinet consultation, or advice with any one, except Seward and the President….

So in regard to each and all the Departments; if I have known of their regulations and instructions, much of it has not been in Cabinet consultations. Seward beyond any and all others is responsible for this state of things. It has given him individual power, but often at the expense of good administration.10

Fortunately for Mr. Lincoln, the important departments of the government – State, Treasury, War and Navy were within easy walking distance of the White House. The homes of key cabinet members – especially that of Secretary of State Seward – were not much farther away. Seward’s home “soon became a cherished haven for a distracted President. Lincoln’s habit of leaving his official headquarters and dropping in unexpectedly on his intimated formed another count against an unconventional and ‘undignified ruler’ [in the eyes of Mr. Lincoln’s critics, but the reason was plain enough,” wrote historian Burton J. Hendrick. “The executive offices, corridors, and even private living quarters of the White House were so constantly swarming with an office-seeking and advice-giving rabble that only chance for relaxation was an occasional half-surreptitious visit to friends.”11

Historian Kenneth A. Bernard noted relaxation within the confines of the White House “could never be as complete and satisfying as relaxation elsewhere. The numerous daily trips to the telegraph office afforded moments for a brief ‘let down,’ as did occasional visits to the Navy Yard; the cool wooded grounds of the ‘Summer White House’ at the soldiers’ Home afforded quiet and temporary peace; but the weary President seemed to be best revived by his excursions to army camps and army headquarters.”12

Protocol forbade invitations to be extended to Mr. Lincoln so his visits to other Washington homes were very rare. However, Mr. Lincoln found some refuge in such diverse places as summers at the Soldiers Home, Sundays at the New York Avenue Presbyterian Church, evenings at Grover’s Theater, and weapons exhibitions at the Navy Yard. Even visits to Union troops in their camps and hospitals were diversions from the constant flow of paperwork and people at the White House.