The Generals and Admirals 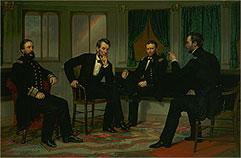 President Lincoln’s primary concern was the conduct of the Civil War so it was natural that military leaders would be frequent visitors to the White House. Union commanders like Winfield Scott, George B. McClellan and Henry Halleck made their headquarters in Washington and visited the White House often. But it was not always the most important military leaders who came to the White House. For example, General John Frémont had a major conflict with President Lincoln in the summer of 1861, but the former Republican presidential candidate rarely visited the White House. On one occasion, he instead sent his wife, Jesse Benton Frémont, who seemed to exacerbate rather than solve her husband’s problems.

General William T. Sherman, one of the Army’s two leading generals at the end of the Civil War, only visited the White House once. That visit occurred before the Civil War broke out and only served to convince Sherman that President Lincoln was being naive about the coming conflict. Like Sherman, General George Meade was a professional, West Point-trained soldier. Although he led the Army of the Potomac from 1863 to 1865, he too was seldom at the White House. Even Ulysses S. Grant infrequently came to the White House to see the President after he was placed in charge of all Union armies in March 1864. Grant preferred to be in the field and the President usually visited him there.

Other generals visited frequently — often because of their political connections. General Benjamin Butler was a perpetual thorn in the side of the Lincoln administration but unlike other thorns -such as Frémont—President Lincoln was unwilling to pull him out of the Union effort. So Butler kept coming up with new ideas for employment and visiting the White House to promote them. Butler had been a Democrat before the war, but like Frémont, he had become a hero of Radical Republicans. He would have been politically foolish to alienate Butler. Similarly, it would have been foolish to alienate General Carl Schurz, who was a leading German-American Republican. So President Lincoln repeatedly sought military positions for Schurz which would keep him and his fellow German-Americans happy. And he let Illinois Democrat John McClernand, a longtime political opponent, raise troops for a separate command in the west.

Many generals, like McClernand, were only somewhat less political than members of Congress. Some like McClernand, McClellan, John Logan of Illinois and John Dix of New York were War Democrats whose support President Lincoln could hardly risk. On the other hand, there was considerable sentiment among Radical Republicans in Congress that generals like McClellan and Fitz John Porter were too pro-Southern, too cautious and too poisoned by West Point to be effective in prosecuting the war.

Lincoln has been much criticized for the appointment of “political generals.” Historian Thomas J. Goss wrote:“Though much contemporary and historical attention has been placed upon these amateur commanders in the field and highlights their numerous tactical shortcomings, their assignment patterns demonstrate that political factors outweighed any military criteria in the administration’s judgment of their success. For the Lincoln administration, the risk of these tactical setbacks were exceeded by the political support amassed every day these popular figures were in uniform, revealing how political generals and their West Point peers were judged using different standards based on distinct calculations of political gain and military effectiveness.”1

Regardless of their political leanings or constituencies. generals often had big egos. They thought they knew better than the civilians in Washington and were often jealous of prerogatives of their rank, seniority, and authority. Typical of these was General David Hunter, most of whose pre-Civil War experience was as an army paymaster. His direct command experience was very limited but he, like Illinois’ John Pope, had the good sense to join President Lincoln’s inaugural entourage to Washington. Hunter’s ego was wounded by a presidential order in the fall of 1861 to take a command which he considered beneath his exalted rank. President Lincoln wrote Hunter gingerly on September 9, 1861: “Gen. Frémont needs assistance which it is difficult to give him. He is losing the confidence of men near him, whose support any man in his position must have to be successful. His cardinal mistake is that he isolates himself, & allows nobody to see him; and by which he does not know what is going on in the very matter he is dealing with. he needs to have, by his side, a man of large experience. Will you not, for me, take that place? Your rank is one grade too high to be ordered to it; but will you not serve the country, and oblige me, by taking it voluntarily?”2

Ironically, Hunter subsequently got himself in the same kind of hot water with the President as Frémont —usurping the presidential prerogatives on slavery. One general who did not usurp his authority was Ulysses S. Grant, whose success was in part due to his understanding of both his mission and his relationship to civilian authority. Historian Brooks D. Simpson has written: “Much has been made of Lincoln’s handling of Grant; less has been said about Grant’s handling of his relationship with the president, in which Grant displaced tact, political shrewdness, and an understanding of the nature of civil-military relations that did much to increase his influence with Lincoln. There is no better way to demonstrate this understanding than to compare a passage in one of Grant’s letters to Lincoln to another from the pen of McClellan. During the Seven Days battle in 1862, a rattled McClellan telegraphed Washington, ‘If I save this Army now I tell you plainly that I owe no thanks to you or any other persons in Washington—you have done your best to sacrifice this Army.’ Compare this to the closing sentence of Grant’s last letter to Lincoln before the start of the 1864 offensive: ‘Should my success be less than I desire and expect, the least I can say is, the fault is not with you.’ The man who could write these words was worthy of Lincoln’s confidence.”3

From the outset of the war, Mr. Lincoln had problems with generals who held the title of general-in-chief—like Winfield Scott, McClellan and Henry Halleck—but failed to exercise the authority of that post or give advice to the President so that he could exercise it. Not until General Ulysses Grant was given that role in March 1864 did Mr. Lincoln truly feel comfortable with his top military commander. President Lincoln himself was confident of his own power. After he appointed Joseph Hooker to command the army of the Potomac in January 1863, he wrote Hooker a classic letter of advice: “I have heard, in such way as to believe it, of your recently saying that both the Army and the Government needed a Dictator. Of course it was not for this, but in spite of it, that I have given you the command, Only those generals who gain successes, can set up dictators. What I now ask of you is military success, and I will risk the dictatorship.” Hooker was chagrined and chastened. Mr. Lincoln closed the letter to Hooker: “And now, beware of rashness. Beware of rashness, but with energy, and sleepless vigilance, go forward, and give us victories.” 4

When the generals did not live up to the President’s expectations, Mr. Lincoln changed them. Ultimately, he was commander-in-chief. “Even after ULysses S. Grant became general-in-chief in March 1864, Lincoln maintained a significant degree of strategic overeight,” wrote historian James M. McPherson. “Lincoln was a hands-on-commander in chief who persisted through a terrible ordeal of defeats and disappointments fo final triumph – and tragedy at the end.”5