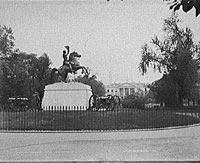 Lafayette Park constituted seven acres of beautiful landscaping across Pennsylvania Avenue from the White House, surrounded by some of the city’s most elite homes. “The houses round it are few in number–not exceeding three or four on each side, but they are among the best in Washington, and the whole place is neat and well kept. President’s Square is certainly the most attractive part of the city. The garden of the square is always open, and does not seem to suffer from any public ill usage,” wrote British novelist Anthony Trollope.1

Tad, Willie, and Bud Holly played there before Willie’s death in February 1862. The park had been called President’s Square before the Marquis de Lafayette visited it in 1824 during a tour of the United States. In the park was an equestrian statue of Andrew Jackson that was widely criticized. The statue was made from cannons captured by General Jackson in the War of 1812 and was surrounded by a gated fence. Tad locked his father and Aunt Elizabeth Todd Edwards in the park in the spring of 1862 and hid the key. Mrs. Edwards later said: “I induced him one day to walk to the Park north of the White House. He hadn’t been there, he said, for a year.”2

The park was surrounded on three sides by the homes of some of the city’s most influential residents as well as on the north side by St. John’s Episcopal Church, where the President occasionally worshiped with Secretary of State William H. Seward or General Winfield Scott. One of the nearby houses was the Washington home of the Montgomery Blair family – later to become the White House guest house. Like fellow cabinet member Seward, Postmaster General Blair was a congregant of St. John’s. Other nearby residences included those of Seward, Secretary of the Navy Gideon Welles and General George B. McClellan.

Two years before the war, the park had been the site of one of Washington’s most famous murders. New York Congressman Daniel Sickles shot Philip Barton Key, who was involved in a torrid affair with Sickles wife. Sickles was subsequently freed – in perhaps the country’s first successful defense of “temporary insanity. Nat Brandt, author of The Congressman Who Got Away with Murder, described the park: “The most elite residential area of all was Lafayette Square, just north of the White House. The square, once a straggly, unkempt, and uncultivated field, was now the garden spot of Washington. Although across from the president’s home, and near the busy buildings housing the State Department as well as the departments of War, navy, and the Treasury, the park was an oasis of peace and quiet. It teemed with plants and flowers and was surrounded by trees. The spacious square was nearly 420 feet in breadth, and slightly over 725 feet in length, covering in all a substantial seven acres. The streets that bound it were lined with townhouses built in the federal style.”3

Other Lincoln Administration officials found the park soothing. John F. Marszalek, biographer of General Henry W. Halleck, wrote: “A favorite haunt for [Halleck] near these place was Lafayette Park. People frequently saw him in this green area pacing up and down or sometimes walking with another officer, discussing war matters.” The overweight Union army commander did not notice that the park had been locked while he walked in comtemplation. “He was in no physical shape to scale the high fence and calling out to the empty streets or sleeping until morning on one of the benches was not appealing. Fortunately, Halleck found an army private in the same predicament. Doing a reconnaissance, the two men decided to have a private get on Halleck’s back and from that higher point climb over the fence to find the gatekeeper. ‘Halleck took care of this young soldier ever afterwards,’ the private’ supervisor later reported.”4