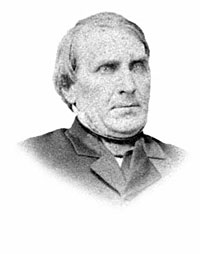 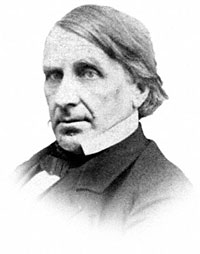 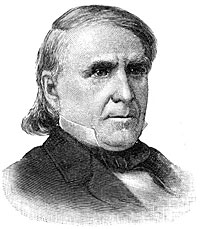 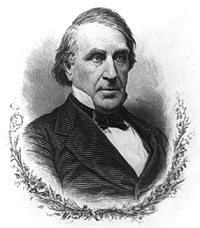 “Watchdog of the Treasury,” Elihu B. Washburne was the Illinois Congressman (Whig, Republican 1851-69) and Galena attorney who supported Mr. Lincoln’s drive for Senate in 1854 and headed the congressional investigation of General John C. Frémont. He served as chairman of the Republican congressional campaign committee in 1860 and he continued to keep the President-elect posted on Washington events after the election.

Historian Michael Burlingame wrote: “The ambitious, obstinate, strong-willed, and belligerent Washburne was a simple, earnest fellow, not intellectually gifted but with a deep streak of common sense.”1 According to journalist Noah Brooks, Washburne was a poor speaker whose speech on the canal bill was a failure. Washburne, wrote Noah Brooks, “is called one of the best working men now in Congress. Something like Stevens in harshness, he has a dominant, leading mind and can lead men sometimes where Stevens cannot drive them. He is in the prime of life, is stout built, gray and unpolished in appearance.”sup>2 In his memoirs, Maine Congressman James G. Blaine called Washburne “a man of courage, energy, and principle, devoted to the Republican party, constant in attendance upon the sessions of the House, expert in its rules, its most watchful and most careful member, an economist by nature, a foe to every form of corruption.”3

It was Congressman Washburne who met President-elect Lincoln at his arrival by train in Washington on February 23, 1861. Washburne later recalled:

When they were fairly on the platform and a short distance from the car, I stepped forward and accosted the President: ‘How are you, Lincoln?’
“At this unexpected and rather familiar salutation the gentlemen were apparently somewhat startled, but Mr. Lincoln, who had recognized me, relieved them at once by remarking in his peculiar voice:
‘This is only Washburne!’
“Then we all exchanged congratulations and walked out to the front of the depot, where I had a carriage in waiting.4

Washburne’s relations with Mrs. Lincoln were mixed; he once wrote his wife “I shall not express my opinion of her until I see you…” On May 17, 1862, Washburne wrote his wife again: “Last night I went up to see old Abe, and after I got through I thought I would pop in and see Mrs. Old Abe, particularly as she was so gracious when I saw her last September. I found her holding her hands all alone in a great big room in the great big White House. She received me very cordially and rather reproached me for not having been more friendly. She well knew the reason. She was very much affected when she spoke of her boy that died last winter—that the house seemed to her like a tomb and that she could not bear to be in it.”5

In Congress, Washburne fought bitterly with Thad Stevens and lost the speakership to Schuyler Colfax in December 1863. Lincoln biographer David H. Donald wrote: “Lincoln quietly began to campaign for the selection of his old friend Illinois Representative E. B. Washburne as Speaker. After Washburne’s candidacy failed to take off, the President invited Colfax to the White House and secured from the slippery Indiana congressman what was not exactly a pledge of support but a promise of neutrality in the upcoming fights in Congress between Radicals and Conservatives.”6

Washburne’s most important role was an the chief congressional promoter of his constituent, General Ulysses S. Grant. Historian Earl Schenck Miers wrote: “The war would have passed by Grant had not Galena’s Elihu B. Washburne demanded that a place be found for this quiet, thoughtful, undramatic little townsman.”6 James Harrison Wilson, an erstwhile Grant aide who served in Washington at the beginning of 1864, recalled Washburne’s efforts on Grant’s behalf:

Notwithstanding his tremendous success, Grant was but little known in Washington, and there was among the leading members of the cabinet and of the Senate a lingering of the cabinet and of the Senate a lingering doubt as to his entire trustworthiness. Immediately after arriving in Washington I was consulted by such senators and representatives as I knew or chanced to meet in regard to his fitness for promotion and for the great power which it would place in his hands. Washburne, the member of congress from his district, was the most potent and aggressive factor in the scheme of reviving the lieutenant generalcy and giving it to Grant. He was bold, active, and persistent in advocating the measure, and was, besides, the firm friend of [Grant aide John A.] Rawlins and his close ally in every measure for Grant’s advancement. I boarded at the same house with him, and from the date of my arrival gave him and the measure he was advocating my most active and unqualified support. We conferred about it in every possible aspect. He, of course, had known from the western press, that a serious doubt had been cast upon Grant’s sobriety, but he also knew that, with Rawlins’ support, the modest general had in no serious degree lapsed from that propriety of conduct necessary for his success. He knew from Dana, Rawlins, and myself the real facts of his case, and that in no instance had he yielded to such an extent as to imperil the safety of his army or the success of his campaigns. But above all Washburne knew that, so long as Rawlins stood by him as guide, philosopher, and friend, the combination would continue to be successful. Therefore, while providing for Grant’s promotion, he provided also fro Rawlins’ further advancement by getting Congress to create the office of chief-of-staff for him. Thus the union between them was perpetuated.”7

At the beginning of 1864, Washburne was summoned by President Lincoln to discuss Grant, whose military promotion Washburne consistently spearheaded. “All I know of Grant I have got from you. I have never seen him. Who else besides you knows anything about Grant,” asked the President. Washburne referred Mr. Lincoln to J. Russell Jones, a mutual friend of the general and the President.8 According to Grant biographer Brooks D. Simpson:

The congressman had hurried to remind his general that ‘when the torrent of obloquy and detraction was rolling over you, and your friends, after the battle of Shiloh, Mr. Lincoln stood like a wall of fire between you and it, uninfluenced by the threats of Congressmen and the demands of insolent cowardice.’ According to Washburne, many of the people who were currently using Grant’s name as ‘a foot ball for the Presidency’ were looking to serve their own agendas. Several of the people now ‘clamouring the loudest’ for a Grant presidency ‘were the most bitter in your denunciation, eighteen months or two years ago.’ Jones letter was even more curious, for it revealed the outlines of a quid pro quo: Lincoln would support Grant’s promotion if Grant supported Lincoln’s reelection. ‘As things now stand,’ he warned, ‘you could get the nomination of the Democracy, but could not be elected as against Lincoln.’ To thwart that possibility, Washburne had already released to the press Grant’s letter of the previous summer calling for the destruction of slavery as a prerequisite for peace, which deterred some Democrats from considering Grant. Rawlins suggested that Washburne and Jones need not worry, for Grant was ‘unambitious of the honor’ and would not allow himself to be used to embarrass the Lincoln administration or its head. 9

Washburne performed a critical function in the 1864 presidential election, according to New York Secretary of State Chauncey Depew. Depew had gone to Washington to get a list of the locations of New York State soldiers so that election ballots could be distributed to them; he had been rebuffed by Secretary of War Edwin M. Stanton who told him: “New York troops are in every army, all over the enemy’s territory. To state their location would be to give invaluable information to the enemy. How do I know if that information would be safeguarded as not to get out?” A frustrated Depew ran into Congressman Washburne in the halls of the War Department. When Depew explained the situation, Washburne replied: “Why, that would beat Mr. Lincoln. You don’t know him. While he is a great statesman, he is also the keenest of politicians alive. If it could be done in no other way, the president would take a carpet-bag and go around and collect those votes himself. You remain here until you hear from me. I will go at once and see the president.” Depew got his order from Stanton within an hour. According to Depew: “The magical transformation was the result of a personal visit of President Lincoln to the secretary of war. Mr. Lincoln carried the State of New York by a majority of only 6,749, and it was a soldiers’ vote that gave him the Empire State.”11

Washburne served briefly as Secretary of State under President Ulysses S. Grant (1869) whose Army career he had sponsored; Washburne’s brother was a major general who served with Grant. In 1864, the congressman pushed through bill that allowed Grant to be named lieutenant general, Army’s highest rank. Too honest to be an intimate of Grant’s corrupt administration, he quickly resigned to become Minister to Paris where he remained until 1877. The brief Cabinet appointment was generally considered a way of promoting his credibility as an ambassador. He unsuccessfully sought the Republican nomination for President in 1880—although his official allegiance was to Grant’s renomination. He became an amateur historian and president of the Chicago Historical Society, which whose founding president was Washburne’s congressional colleague, Isaac N. Arnold.

Washburne had not always been a Lincoln ally. Washburne’s earlier support for Justin Butterfield in 1849 had helped deny Lincoln the position of Land Office Commissioner and some doubted his loyalty to Lincoln in 1858. Washburne was Greeley’s emissary to Chicago to push for Republican nomination of Stephen Douglas for the Senate in 1858 and was an ally and friend of Chicago Tribune’s Charles Ray.

Washburne ran unsuccessfully for Congress as a Whig in 1848 and won as a Whig in 1852. He rose in the House leadership to become chairman of the Committee on Commerce and later of the Committee on Appropriations. Other attempts for political promotion failed—including the speakership of the House and several attempts to win the Senate designation from Illinois. Generally he placed his own ambition behind the welfare of friends and party. Elihu and his two Maine brothers—Israel and Elihu—served simultaneously in Congress in 1860. During the Civil War, Israel served as governor of Maine and Cadwallader as a Union general. Another, less talented, brother lived in California and his Republican loyalty was rewarded with an appointment as Minister to Paraguay. A fifth brother was named surveyor-general in Minnesota.