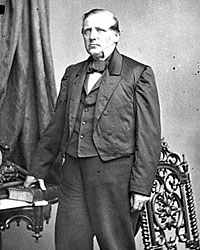 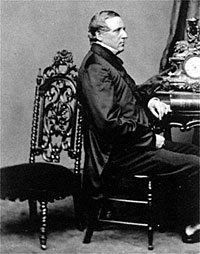 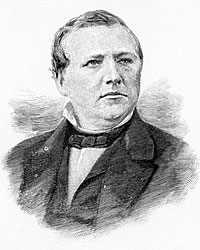 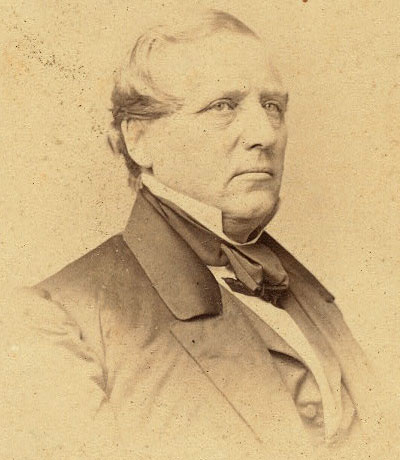 Secretary of the Interior, John Palmer Usher succeeded an ill and weakened Caleb Smith when Smith resigned to become a federal district judge at the end of 1862. Usher had been Smith’s assistant secretary and effectively had been the acting secretary of the department which Smith had neglected. The appointment was far from automatic although Usher had an advantage as a Hoosier seeking a post which many Indiana residents thought was theirs by right. The judicial position which Smith accepted was one which Usher himself had wanted.

Unlike many contemporaries, he favored more humanitarian treatment of Indians. In October 1862, he helped deal with problems created by unrest of Indians in Minnesota “When he returned to Washington, he presented a report to Smith, and discussed with Lincoln the problem raised by the action of the Minnesota courts which had sentenced the Indian leaders to death. The evidence that he had gathered was used as a basis for the ultimate decision that local accounts of damages and atrocities were somewhat exaggerated; federal compensation was subsequently awarded in only about half of the cases presented to the Department,” wrote biographers Elmo R. Richardson and Alan W. Farley.sup>1 Usher also pushed colonization schemes in Central America for former black slaves—with a mixture of economic self-interest and conviction.

Journalist Noah Brooks described Usher as “fair, fat, fifty and florid, well fed, unctuous, a good worker, as good a liver, an able lawyer, an accidental member of the Cabinet by the law of succession, and is socially dignified and reservedly get-at-able.”2 Richardson and Farley wrote: “A gregarious man, he enjoyed the ceremonial duties of the office, and was especially content while exchanging political gossip and recollections with a circle of cronies. His dignified appearance and forensic abilities made him a perfect greeter and official host for the administration.”3

Usher brought his wife and his children to Washington from Indiana and set up housekeeping and entertaining in a house at 425 F Street. According to his biographers, “Sometimes the youngest sons accompanied him to the White House on Cabinet meeting days, and played in the carriage parked outside until he had finished. Once, Usher took John, Jr., into the session and introduced him to all the members, who shook hands with him…”4

Usher’s “own efforts to support the President and his party were without stint and, characteristically, without self-advertisement,” wrote biographers Richardson and Farley. “Except for the time when he worked with Lincoln on Departmental matters at the Capitol or the White House, the Secretary of the Interior saw his chief less often than most of his colleagues or other party advisers. On some of these occasions patronage was the subject of discussion, or the two men talked about the administration’s war policy and the health of their party. Because of the way in which he expressed his personal loyalty to Lincoln in letters and conversations with his friends, those Indianians considered him of all the Cabinet members most unconditionally attached to the President…”5

Usher was indeed a faithful if dull supporter of the president but he had little impact on Administration deliberations. Secretary of the Navy Gideon Welles once recorded how Usher talked at a Cabinet meeting “without much point or force, on a subject he did not understand, nor to which he had given much attention.”6 Gideon Welles recorded in his diary how Usher inadvertently caused trouble for President Lincoln in 1864 by encouraging a visit by Ohio Senator Tom Ewing:

Old Tom Ewing of Ohio was hanging around the door of the Executive Mansion as I went in. I stopped for a moment to exchange civilities. Usher, who followed me, informed the President that the old man was waiting for an interview and thought of leaving, but U. advised him to remain now that he had got there. The President expressed his regret at Usher’s advice and, turning to me, said, ‘You know his object?’ I said it was probably Wilkes’ case. The President said it was, and, notwithstanding Wilkes had abused both him and me, he was inclined to remit his sentence,—looking inquiringly at me as he spoke. I told him that I should not advise it; that at the proper time and in the proper way something might be done, perhaps, without injury though Wilkes had no claim, and this hiring old Mr. Ewing, who is selling his personal influence, is all bad. Usher took strong and emphatic ground against any favor to Wilkes, who is heartless and insubordinate.
It is a misfortune that the President gives his ear to a class of old party hacks like Ewing and Tom Corwin, men of ability and power in their day, for whom he has high regard but who are paid to come here and persuade the President to do wrong. Ewing would not, of himself, do or advise another to do what he beseeches of the President, except for money. All this the President has the sagacity to see, but hardly the will to resist. I shall not be surprised if he yields, as he intimated he was ready to do before any remark from me.7

During 1864, pressure grew in Chicago, New York and Washington to replace Usher as Secretary of the Interior with someone of greater stature and political influence. According to his biographers: “Usher decided to put his trust in the cornerstone of his official relations; he assured his friends that Lincoln was disposed to give Indiana a cabinet post and would retain him in the belief that, by doing so, he would give ‘as much satisfaction as by attempting a change. “Whatever small comfort the Secretary could get out of this conclusion was shattered soon afterwards. At the close of a cabinet meeting early in December, [William H. Seward] warned him that the demand for reorganization was becoming formidable.”8 According to Gideon Welles’ diary: “Seward took Usher aside in the large hall just as they were coming out, and he spoke and beckoned to me also after the others had turned off t come with them. He said, as I came up, that he was remarking to Usher that Congress and the country were full of speculations about appointments; that he did not care a damn about himself,—if the president wanted him he would remain, and would go if he did not. He was going to take no part against any other member of the Cabinet, but should stand by them. Usher said it was important that he should know, for he had to depend on his salary or income for his support, and probably Mr. S. could let him know what were the President’s intentions.” Unfortunately for Usher, he had few allies for “there is little evidence to indicate that Usher had anything more than official intercourse with the Cabinet members,” noted biographers Richardson and Farley.9

Usher’s political prospects were undermined by the machinations of Republicans inside and outside of Indiana. When Indianan Hugh McCulloch emerged as the President’s choice to succeed William P. Fessenden as Secretary of the Treasury, Usher lost his political power base. His position was further undermined by pressure to appoint a Methodist to the Cabinet—Usher having alienated some Methodists with his handling of Kansas land claim Usher resigned on March 9 and Senator James Harlan, a Methodist, was named to succeed him the same day but the effective date of the transition was postponed until May 15. At the same time, Usher’s economic star rose. Usher returned to law and began work with the Union Pacific Railroad, whose interests he had previously promoted as a stockholder and cabinet member with powers over the railroad’s right-of-way.

An attorney who developed a special interest in transportation issues, Usher had served on the Eighth Circuit with Abraham Lincoln before the war. He had also been one-term state legislator. Usher briefly had served attorney general of Indiana from November 1861 to March 1862.

“John P. Usher is a man of no ordinary talent,” wrote Illinois attorney Usher F. Linder in his memoirs. “When I first knew Usher he was a very handsome man, possessed of fine form and features, but after passing the age of forty he had grown quite corpulent, though he was still by no means a homely man. I know of but few better lawyers than John P. Usher. I have been told upon goo authority, that he is worth several million dollars, most of which eh acquired while Secretary of the Interior by entering large bodies of choice land along the line of the Union Pacific Railroad, besides which he owns a large amount of stock in that company.”