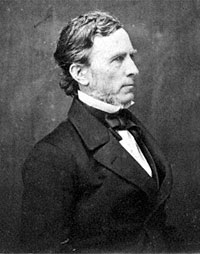 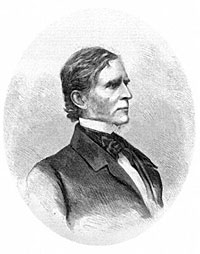 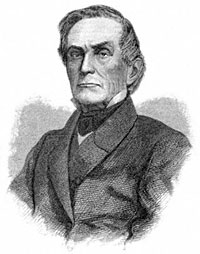 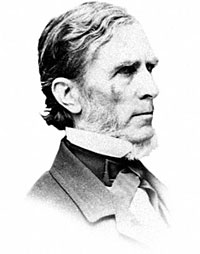 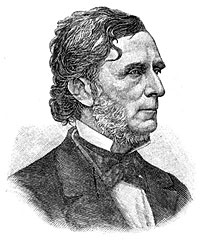 Maine Senator (1855-64, 1865-69, Republican) William Pitt Fessenden was chairman of Senate Finance Committee, which had responsibility for raising funds for the Civil War. He held that position before he succeeded Salmon Chase as Secretary of the Treasury on July 1,1864 and returned to it eight months later. As a leading Senator in December 1862, he helped instigate actions which brought relations among President Lincoln and Radical Republicans in the Senate and Cabinet to a head and almost led to the ouster of William H. Seward from the cabinet.

Quick action was needed to replace Chase in July 1864 and Lincoln’s first choice from Ohio wisely declined the nomination. Ohio Governor John Brough met with President Lincoln the night of the Chase resignation and was told by President Lincoln that “this is the third time he has thrown this resignation at me, and I do not think I am called on to continue to beg him to take it back, especially when the country would not go to destruction in consequence.” Over the next two days, Brough met several times with President Lincoln and finally urged him to appoint Fessenden. “He will not accept,” said the President, to which Brough responded: “The public will compel him to.”1

Fessenden himself did seek to turn down the appointment but the President persuaded him to accept—and had the Senate confirm him while Fessenden was still at the White House. Lincoln valued his prickly integrity and told Fessenden: “Fessenden, the Lord has not deserted me thus far, and He is not going to now—you must accept!’2 He then organized others to pressure Fessenden to take the post. Fessenden had a legitimate excuse; he suffered from recurring illness, probably chronic malaria. Washington summer aggravated his health and he longed to return to Maine to recuperate. Presidential secretary John Hay recorded the day’s events in his diary:

I went in at half-past ten this morning to see the President. He gave me a nomination: he said “I have determined to appoint Fessenden himself.’ I said ‘Fessenden is in my room waiting to see you.’ ‘Send him in & go at once to the Senate.’
I delivered the message to the Senate & it was instantly confirmed, the executive session not lasting more than a minute: returned to my office. There I meet Abe Wakeman in high glee. He thought it a great thing to do: that henceforward the fifty thousand treasury agents would be friends of the President instead of enemies. I could not help pouring some cold water on his enthusiasm.
Going to the Senate as usual early this afternoon I saw several who seemed very well pleased. At the house it was still better. Washburne said, ‘This appointment of Fessenden is received with great éclat. The only fear is that he will not accept….A strong delegation of Congress waited upon Fessenden today to add their request that he would accept.”3

The pressure from political and commercial interests on Fessenden to accept the Cabinet post became overwhelming. On July 3, “Secretary” Fessenden wrote a cousin: “The day before yesterday was one of the most miserable of my life. The President insisted upon appointing me Secretary of the Treasury against my consent and positive refusal to accept it. He cooly told me that the country required the sacrifice, and I must take the responsibility. On reaching the Senate, being a little late, I found the nomination sent in and confirmed. I went at once to my room, and commenced writing a letter declining to accept the office, but, though, I stayed there until after 5 P.M., I found no opportunity to finish it – being overrun with people, members and delegations appealing to me to ‘save the country.’ Telegrams came pouring in from all quarters to the same effect, with messages from the President. About ten o’clock I had been able to finish my letter, and went to deliver it in person, but the President was in bed asleep. I left a message for him, and called again in the morning. He then refused to accept any letter declining the appointment, saying that Providence had pointed out the man for the crisis, none other could be found, and I had no right to decline. All this I could and should have withstood, but the indications and appearance from all quarters that my refusal would produce a disastrous effect upon public credit, already tottering, and thus perhaps paralyze us at the most critical juncture in our affairs, was too much for me. I felt much as Stanton said,’You can no more refuse than your son could have refused to attack Monett’s Bluff, and you cannot look him in the face if you do.’ I told him it would kill me, and he replied, ‘Very well, you cannot die better than in trying to save your country.’”4 Fessenden had written President Lincoln:

After much anxious, not to say painful, reflection, I feel compelled to decline the appointment of Secretary, conferred upon me yesterday.
Thoroughly exhausted by the labors of the session, and convinced by past experience, as well as by medical opinion, that I have reached a point where my physical powers, already much impaired, can only be restored and sustained by a period of absolute repose, I feel that to undertake, at this time, the duties and responsibilities of an office involving labor and interests so vast, would be an act of folly on my part, and certain to result in speedy failure.
Allow me, sir, to thank you for the good opinion expressed by an appointment so honorable, and to assure you of my sincere regret that I am unable to comply with your wishes.”5

Fessenden himself did not suffer well either big egos or small talents. Secretary of the Navy Welles recorded Fessenden’s behavior at a February 1865 cabinet meeting: “Very little before the Cabinet. The President when I entered the room, was reading with much enjoyment certain portions of Petroleum V. Nasby to [William Dennison and James Speed]. The book is a broad burlesque on modern Democratic party men. Fessenden, who came in just after me, evidently thought it hardly a proper subject for the occasion, and the President hastily dropped it.”6 The impeccably dressed Fessenden was usually a model of propriety and decorum but on one occasion as a senator, he had an argument with the President over patronage and used several expletives. President Lincoln, who was accustomed to the profanity of Episcopalian William Seward, said to Fessenden: “You are an Episcopalian, aren’t you, Senator?” When Fessenden admitted he was, President Lincoln replied: “I thought so. You Episcopalians all swear alike.”7

Chase approved of Fessenden’s deportment at Treasury, writing in September that “He has been in communication with me since he took charge, and in every step, with perhaps one slight exception, his judgment has corresponded with mine. He sees several matters now in quite a different light from that in which they appeared to him when Senator.”8

Fessenden himself became an admirer of the President, although he was a frequent critic early in the war. In 1864, for example, Fessenden wrote a friend: “It looks very much as if we were to have Lincoln for another term, if we can beat the copperheads. Perhaps this is quite as well as to try any new man. Whatever may be his failings, and he is not without them, the people have a strong faith in his honesty of purpose, and at a time when their endurance is so largely drawn upon, that is a great point.”9 A Treasury aide, Maunsell B. Field, later wrote: “I remember that one day, immediately after a Cabinet meeting, Mr. Fessenden, entering his room in the Department where I was awaiting his return, advanced toward me with glowing countenance, and said, ‘I tell you, Mr. Field, Mr. Lincoln is more of a politician than all his cabinet put together!’ Before he had the opportunity to explain what had so excited his enthusiasm, somebody came in upon business, and the matter was dropped.”10 Fessenden’s short term of office followed the patterns set down by his predecessor. According to biographer Charles A. Jellison, Fessenden did “much to clean up the corruption and inefficiency that had plagued the Treasury during the regime of Secretary Chase, and when he stepped down from his post he was able to turn over to [Hugh McCulloch] a noticeably improved Department, insofar as both personnel and procedure were concerned.”11

Fessenden served until March 1865 when he returned to Senate (rather than allow outgoing Vice President Hannibal Hamlin to get the seat). “The duties which he was required to perform were distasteful to him from the start, and the longer he remained in office the more distasteful they became to him,” wrote his deputy and successor, Hugh McCulloch. “If Mr. Fessenden had been strong in health, if his duties had been congenial, and he had been content to remain at the head of the great department, he would have been equal to his duties, however difficult and onerous they might have been. But his health was not good, and his heart was not in executive, but in his legislative work.”12

Historian Michael Burlingame noted that “Fessenden observed that President Lincoln “came here tall strong & vigorous, but has worked himself almost to death. The good fellow thinks it is his duty to see every body, and do every thing himself.”13

Upon his return to Congress, Fessenden became chairman of Joint Committee on Reconstruction. He was one of a handful of Republicans who voted against removal of President Andrew Johnson, thus earning him the enmity of Radical Republicans with whom he had once been identified. Fessenden was an attorney active at the local and national levels. He was the father of two Union generals, Francis and James D. Fessenden; another son died in Second battle of Bull Run. His family was remarkable in other ways. Two of Fessenden’s brothers served Maine in the U.S. House of Representatives at the beginning of the Civil War. Two other brothers served in federal patronage positions, which Fessenden was skilled in filling with friends and relatives.