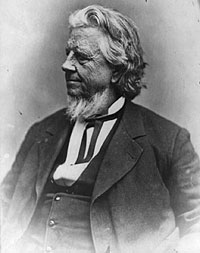 One-time Democratic congressman (1849-1853) and chairman of the Ohio delegation to the 1860 Republican National Convention, David K. Cartter placed Salmon Chase’s name in nomination but actually supported Senator Benjamin F. Wade. He changed four votes to Lincoln to put him over the top. Later, President Lincoln appointed him minister to Bolivia (1861-1862) and chief justice for the District of Columbia in 1863. Cartter was a “rude, blunt, arrogant, but brilliant Ohioan, ” according to historian LeRoy Fischer.1 Large and imposing, he was a stutterer. He also wasn’t much of a diplomat, agreeing to the post because he “wanted to see the Andes.”2

“His appointment as chief justice opened opportunities to promote the extremist tendencies of Radicals. Long an abolitionist, he had been appealed to for legal counsel by his friend John Brown, following the Harpers Ferry raid. Cartter was also a close confidant and admirer of General Butler and did much to promote his political and military fortunes,” wrote Fischer. Although a Lincoln appointee, his loyalty was primarily to congressional Radicals like fellow Ohioan Wade. “Well, let’s go up and swear at Lincoln a while,” Cartter would sometimes say in order to get a group of Radicals to meet at the home of Michigan Senator Zachariah Chandler.3

On the night of Lincoln’s assassination,Cartter met several Administration officials at Seward’s house. Together with Secretary of War Edwin M. Stanton, Secretary of the Navy Gideon Welles and General Montgomery C. Meigs, they prepared to leave for Ford’s theater. When their carriage driver froze in terror, Cartter took the reins himself. At the Petersen House, he helped collect evidence and organize the investigation of the assassination.