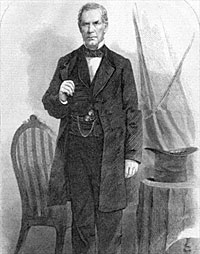 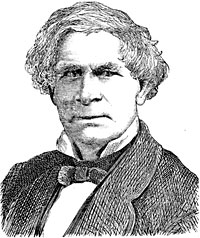 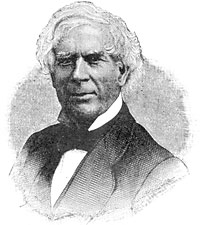 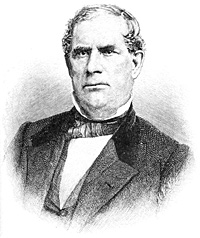 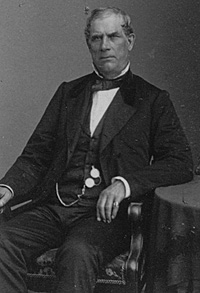 “The Wizard of the Lobby.” “The Dictator.” “My Lord Thurlow.” New York State Whig and Republican leader allied personally and politically with William Seward against the “Albany Regency” of Martin Van Buren and William Marcy. Editor of Albany Evening Journal which he founded in 1830 and a prototype political boss who placed patronage and Seward’s pursuit of the Presidency above principle or party. He helped promote Horace Greeley’s career until they broke over Greeley’s ambitions and politics. Weed was Seward’s representative in bringing President-elect Lincoln the Crittenden Compromise, which Lincoln rejected. Weed was used by President Lincoln as a special emissary with General Winfield Scott to help keep England and France out of the war in 1861.

According to Leonard Swett, an Illinois political ally of President Lincoln and a business partner of Weed: “Mr. Lincoln and Mr. Weed, to use our rough phrase, naturally ‘took to each other’ from the very day they met, and their relations grew gradually more agreeable and friendly until the day of the former’s death. Often, when knotty questions arose, Mr. Lincoln would send for him for consultation, or, stating a case, ask him to arrange or suggest a way in which what he wanted to be done could be done mostly easily.”1 In December 1862, Weed was at the White House when President Lincoln asked him to deliver a message to Governor Horatio Seymour of New York: “Governor Seymour has greater power just now for good than any other man in the country. He can wheel the Democratic party into line, put down rebellion, and preserve the government. Tell him for me that if he will render this service to his country, I shall cheerfully make way for him as my successor.”2 Weed delivered the message but Seymour took the path of other Peace Democrats, opposing many of President Lincoln’s policies.

“Weed’s trips to Washington, his close relationship to Seward, and the friendship of Swett and Davis all made for frequent contacts with Lincoln. The President liked the big New Yorker, valued his judgment and recognized the importance of his political support. Weed was permitted to have a considerable, though by no means a monopolistic control over the patronage of the Empire State, and he was called upon a variety of services for the government at Washington,” wrote Seward biographer Glyndon Van Deusen. Weed undertook some special missions for President Lincoln. One was a peculiar request in February 1863 that Weed raise $15,000 for an unspecified purpose. “The most curious illustration of Lincoln’s confidence, an incident that is still cloaked in mystery, came at the height of the war. On February 18, 1863, Weed was staying at the Astor House in New York. That day he received a telegram from Lincoln’s secretary, Nicolay, asking him to be in Washington by the following morning,” wrote Van Deusen. “The summons was obeyed and, after breakfasting with Seward went to the White House. Lincoln explained that there was urgent need for $15,000 and that this money could not be taken from any available appropriation. Could Weed raise the amount?” Weed could and did, but he never found out the reason the money was needed.3 Weed requested a letter of explanation which Mr. Lincoln furnished: “The matters I spoke to you about are important. I hope you will not neglect them. Truly yours, A. Lincoln.”4 Another task was a joint mission to Europe with Archbishop John Hughes. They left in November 1861 and spent most of their time trying to influence public and government opinion in England and France.

Like Seward, Weed was anathema to Radical Republicans because he believed in preservation of the Union without emancipation. In early 1863, Weed stepped down as editor of the Evening Journal, writing, “I differ widely from my party about the best means of crushing the Rebellion. That difference is radical and irreconcilable.”5 This difference sometimes led to friction with the president, whom Weed persistently pressured for New York patronage. However, he publicly continued to be a loyal supporter, complaining to David Davis about radical Republicans: “They will all be against him in ’64, why does he persist in giving them weapons with which they may be able not only to defeat his renomination, but to destroy the government.”6

When he and Swett raised the issue of reelection with the President in February 1864, he replied: “Swett, do you know that same bee has been buzzing in my bonnet for several days?”7 Weed was particularly active in securing the vice presidential nomination for Andrew Johnson—largely to protect Seward’s political position.

Weed maintained good relations with Democrats and attempted to influence the choice of the Democratic presidential nominee in 1864. He was unsuccessful in preventing the nomination of George McClellan—and admitted that he was sometimes unsuccessful in his influence on Republicans in Washington as well. After Mr. Lincoln’s renomination, Weed proclaimed in an open letter in the Albany Evening Journal that he had been held in “no account” by the President—an obvious understatement of his patronage influence but accurate reflection of his power to reverse emancipation policy.8 The letter preceded the culmination of a patronage dispute over appointment of the assistant secretary of the Treasury for New York. The result was a victory for Weed and the resignation on June 30, 1864 of Treasury Secretary Salmon P. Chase.

Weed was a sometimes reluctant supporter of Lincoln’s reelection Seward biographer John Taylor wrote: “It was Seward who, behind the scenes reminded his old friend that there was no alternative to Lincoln, and Weed ultimately conceded as much. When the Republican state committee convened in late May, Wed rammed through an endorsement of Lincoln’s renomination.”9 President Lincoln understood Weed’s importance to his reelection. He told David Davis “that he has the highest esteem for you, knows that you are patriotic, and that it hurts him when he cannot do what you think advisable.”10 Historian William Frank Zornow wrote: “In the capital [Weed] spent countless hours closeted with the President, and they were joined by Simon Cameron of Pennsylvania, John Forney, and other ‘wire pulling politicians.’ Probably as a result of some promise concerning more patronage, Lincoln induced Weed ‘to [roll] up his sleeves and [to go] to work making his combinations.’ It is interesting to note that shortly after this quadrumvirate began holding their meetings. Weed’s Albany Evening Journal, Cameron’s Philadelphia Evening Bulletin, and Forney’s three papers declared for Lincoln. Chase was completely dumbfounded by these unexpected developments.”11

Weed was a complex man. Union Army officer and journalist Donn Piatt called “Thurlow Weed, a man of no learning but of keen instincts, had a knowledge of human nature, made perfect through its low but correct estimate of average humanity.” According to Piatt, “Thurlow Weed, with his peculiar shrewdness, turned over to his co-worker all the honors of office, while retaining to himself all the emoluments that came from success.” Thurlow Weed wrote that Lincoln’s nature ‘was so elastic, and his temperament so cheerful, that he always seemed at ease and undisturbed.”12 Lincoln Scholar Harold Holzer wrote: “Lincoln in turn grew to like the political leader, who despite his legendary political power, seldom spoke publicly because of a stammer.”13

Weed also maintained very good relations with businessmen who wanted to make money off the war. Although his actions may not have been corrupt, he certainly exploited his opportunities to earn a profit from contracts or lobbying. Money making was important because both Weed’s style of living and giving to others were expensive. However, according to Weed biographer Glyndon G. Van Deusen, “Weed had a code of honor. He made it a rule never to urge the appointment of a relative to office. There is no proof that he ever supported a bill that he believed to be injurious to the public welfare. There is a considerable body of evidence to indicate that the bribes of office seekers were consistently rejected.”14

Mr. Lincoln traveled to Albany to meet Weed during the 1848 presidential campaign, but did not see Weed again until shortly after the 1860 Chicago Republican National Convention. Weed went to Springfield again after the 1860 election and tried to influence the selection of the Cabinet, but he was largely unsuccessful. He spent much of the Civil War struggling with other Republican factions for control of New York political offices and patronage.

After the war, Weed accelerated his efforts to bring about an anti-Radical union of Republicans and Democrats. He supported Andrew Johnson and later Ulysses Grant. Weed was detested by Mary Todd Lincoln; she was one of those she blamed for opposition to her federal aid after President Lincoln’s assassination. He retaliated with very pointed criticism in his New York City newspaper, the Commercial Advertiser.