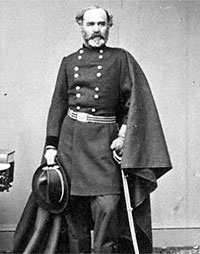 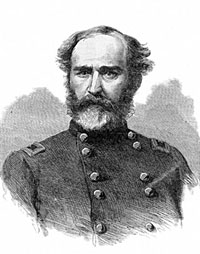 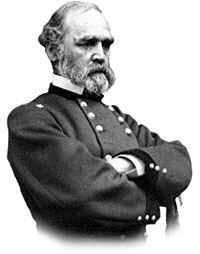 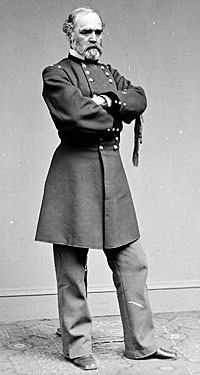 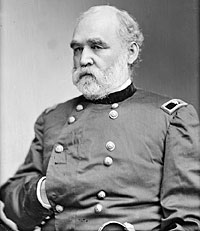 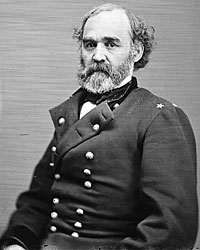 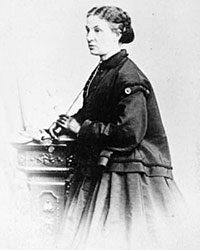 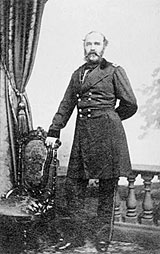 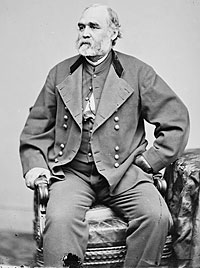 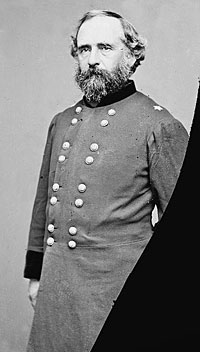 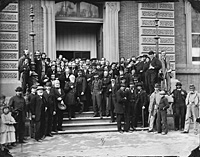 Union Quartermaster General Montgomery Meigs was appointed to his post in May 1861. Meigs headed the army expedition to Fort Pickens, Florida in 1861. He frequently conferred with President Lincoln about military affairs and military weapons, beginning with the expedition to relieve Fort Sumter and Fort Pickens in 1861.

Meigs was dismissed from this engineering duties by Secretary of War Floyd in 1859 and reassigned to the Dry Tortuguas. His familiarity with Florida led to his involvement by Secretary of State Seward in a plan to keep control of Fort Pickens. In the Pickens-Sumter affair, Meigs took on an extraordinary role, according to James G. Randall: “It was Meigs whom Seward used, in a secret and underhand manner, to promote the Pickens expedition, which was in a peculiar sense Seward’s own scheme. Working with [Secretary of State Seward], Meigs on April 1 was busy all day making orders for the signature of the President. He related that he was being asked to assume command far beyond the level of his captain’s rank.” In effect, Meigs help shift the warship Powhatan from the relief of Fort Sumter to the relief of Fort Pickens, undermining the intent of orders of President Lincoln and bypassing Secretary of the Navy Gideon Welles.1 Meigs went with the rescue fleet to Florida and then reported on the mission to President Lincoln on May 3, 1861.

Meigs’ association with the president helped promote him to Quartermaster-General. Scott supported Meigs’ appointment as Quartermaster General: “Colonel Meigs has, doubtless, high genius, science, vigor and administrative capacities – every qualification for the office in question save special experience in that department…heartily support your preference.”.2 Mr. Lincoln, however, got himself in trouble with Illinois political allies who proposed he appoint another man as quartermaster general. “What nation do you desire Gen. [Robert Allen] to be made Quartermaster-General of? This nation already has a Quartermaster-General?”3

In September 1861, Meigs also served with Postmaster General Montgomery Blair as the President’s emissary to check on General John Frémont in Missouri.

In January 1862, Meigs suggested that McClellan’s typhoid was likely to sideline him for six weeks and that Mr. Lincoln should meet with McClellan’s top division commanders to prepare for both a defense and attack.3 The President subsequently arranged several meetings with Meigs, William H. Seward, Salmon Chase, Assistant Secretary of War Thomas A. Scott, and Generals Irvin McDowell and William Franklin. As Meigs later recalled these meetings:

On Friday, January 10, 1862, the President, in great distress, entered my office. He took a chair in front of the open fire and said, ‘General, what shall I do? The people are impatient: Chase has no money and he tells me he can raise no more; the General of the Army has typhoid fever. The bottom is out of the tub. What shall I do?’
I said, ‘If General McClellan has typhoid fever, that is an affair of six weeks at least; he will not be able sooner to command. In the meantime, if the enemy in our front is as strong as he believes, they may attack on any day, and I think you should see some of those upon whom in such case, or in case any forward movement becomes necessary, the control must fall. Send for them to meet you soon and consult with them; perhaps you may select the responsible commander for such an event.’
The council was called. On Sunday, January 12, McDowell and Franklin called on me with a summons to the White House for 1:00 P.M. These officers, and messrs. Seward, Chase, Blair, of the Cabinet, attended. The President announced that he had called this meeting in consequence of the sickness of General McClellan, but he had that morning heard from him that he was better, and would able to be present the next day; and that, on this promise, he adjourned the discussion for twenty-four hours.
The next day, January 13, the same persons and General McClellan appeared at the rendezvous. The President opened the proceedings by making a statement of the cause of his calling the council. Mr. Chase and Mr. Blair, if memory is accurate, both spoke. All looked to McClellan, who sat still with his head hanging down, and mute. The situation grew awkward. The President spoke again a few words. One of the generals said something; McClellan said something which evidently did not please the speaker and again was mute.
I moved my chair to the side of McClellan’s and urged him, saying, ‘The President evidently expects you to speak; can you not promise some movement towards Manassas? You are strong.’ He replied, ‘I cannot move on them with as great a force as they have.’ ‘Why, you have near 200,000 men, how many have they?’ ‘Not less than 175,000 according to my advices.’ I said, ‘Do you think so?’ and ‘the President expects something from you.’ He replied, ‘If I tell him my plans they will be in the New York Herald tomorrow morning. He can’t keep a secret, he will tell them to Tad.’ I said: ‘That is a pity, but he is the President, – the Commander-in-Chief; he has a right to know; it is not respectful to sit mute when he so clearly requires you to speak. He is superior to all.’
After some further urging, McClellan moved, and seemed to prepare to speak. He declined to give his plans in detail, but thought it best to press the movement of Buell’s troops in the central line of operation. After a few words that brought out nothing more, Mr. Lincoln said, ‘Well, on this assurance of the General that he will press the advance in Kentucky, I will be satisfied, and will adjourn this council.’”4

Lincoln aide John Hay noted that in July 1862: “When McClellan lay at Harrison’s landing, Meigs came one night to the President & waked him up at Soldiers’ Home to urge upon him the immediate flight of the Army from that Point – the men to get away on transports & the horses to be killed as they [could] not be saved. ‘Thus often, says the Prest. ‘I who am not a specially brave man have had to sustain the sinking courage of these professional fights in critical times.”5 Meigs had done a an analysis of the Army of Northern Virginia and calculated that its strength was 105,000, not the 200,000 that McClellan claimed. Historian James M. McPherson noted: “Meigs had great credibility with Lincoln.6

The contrast between Lincoln and Stanton at the time Pope was defeated and Lee appeared before Washington, was very great. The latter was steaming about with vigor, under great pressure, issuing volley after volley of orders to be executed ‘at once’ for the safety of the city, for at first we all thought the capital was really going to be captured. Lincoln, on the other hand, dropped into my room on his weary way to see Stanton, drew himself way down into a big chair and, with a mingled groan and sigh, exclaimed: ‘Chase says we can’t raise any more money: ‘Pope is licked and McClellan has the diarrhea. What shall I do? The bottom is out of the tub, the bottom is out of the tub!’
I told the President to meet his generals with Stanton, fix the bottom back in the tub, rally the army, and order another advance at once. This seemed to brace him up a little and he went on to the War Department; but so the moment he was completely discouraged and down hearted. Stanton, on the other hand, was more full of power and vehement energy than ever..7

Meigs helped to stem the panic in Washington two years later when in July 1864 the city was threatened by Jubal Early’s Confederate forces and he organized War Department personnel as a defense force. That October, Meigs’ son John Rodgers Meigs was shot and killed in the Shenandoah Valley in an incident that his father regarded as murder.

Lincoln valued Meigs’ competence in organzing Union supply operations and his advice on military affairs. The president commented that Meigs only came to the White House when “he has something to say worth hearing.”.8 Historian Allen C. Guelzo wrote: “Montgomery Meigs proved to be both tireless and incorruptible as quartermaster general. He reorganized the Quarutermaster’s Department into nine division[s] (for animals, clothing, transportation, forage, barracks, hospitals, wagons, inspection, and finance) and expanded the workforce in his office to 591 by the end of the war, with 130,000 other employees in depots across the North.”9

Meigs spent the night that Mr. Lincoln died near the President’s bedside at the Peterson house. But before he arrived there, he was called to the home of William H. Seward, who had also been attacked. According to historian Richard H. Luthin, Meigs “found some rooms in partial shambles with Lincoln’s Secretary of State on the floor, groaning and bleeding, gashed with knife wounds. Seward’s son, Acting Secretary of State Frederick W. Seward, was in a coma, deeply stabbed. The Department of State messenger was gagging with blood from a stab by [Louis Powell. And on the white coat of the male army nurse, Robins, the damp red spot was spreading. Seward’s daughter, Fanny, lay unconscious on the floor, the result of terror.”10

Before the Civil War, Meigs had been involved in the construction of the Washington Aqueduct and the reconstruction of the Capitol. After the war, he designed an addition to the Smithsonian Institute, called the National Museum when it was constructed and now called the Arts and Industries Building. He also designed and supervised the construction of the Pension Building, which now houses the National Building Museum. Ernest B. Furgurson wrote in Freedom Rising: Washington in the Civil War, “Architecture was one among Meigs’s collection of talents; he was a Renaissance man, an accomplished administrator, technician, artist, lobbyist and amateur scientist.”11