Parks and Pennsylvania Avenue: The Ellipse and Treasury Park 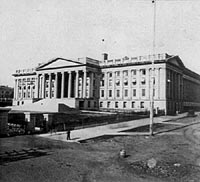 The area south of the White House, now known as the Ellipse, frequently was the site of Union Army encampments. The area even further south around the unfinished Washington Monument was used to graze cattle for Union soldiers. A slaughterhouse was also built here. Nearby was a canal through which flowed much of the city’s sewage and debris. Historical writer Geoffrey Peret described the area as a “weedy, neglected ground surrounded by a low fence” which “was sometimes used for horse races and infantry drills.”sup>1

Treasury Park was a grassy area southeast of the White House where weapons were sometimes by the President. Mr. Lincoln had never been a hunter but he was a fair marksman and he took a keen interest in the equipment used by Union soldiers. According the William O. Stoddard, “The Mall is that great slope of grass and weeds and rubbish between the White House grounds and the Potomac. Away out in the middle of it there is a pile of old lumber as large as small house. It is just the thing to set up a target against.” Stoddard went on to describe the scene of one weapons test in which Mr. Lincoln came face-to-face with his own troops.

One’s nerves are all the better for rifle practice after a good night’s sleep, and this is a clear, still, beautiful morning.

If Mr. Lincoln is not yet up –
‘Well, you didn’t keep me waiting. Now, you take that thing and I’ll take this, and we’ll go right along.’
‘That thing,’ as he calls it, is the old Springfield, with the screw-twisting additions, and it takes in cartridges of the full service size. His own choice is a kind of Spencer, and is nearly finished at about sporting caliber. No Union force ever yet marched out armed precisely as the Commander-in-chief and his detached are this morning.
‘General Ripley says, Mr. Lincoln, that men enough can be killed with the old smooth-bore and the old cartridges, a ball and three buckshot.’
‘Just so. But our folks are not getting near enough to the enemy to do any good with them just now. We’ve got to get guns that’ll carry further.’
He is in a talking mood, and the entire breech-loading and muzzle-loading question is rapidly analyzed during the walk to the Mall.
A hundred yards is fair trial-distance, and a board against the pile of lumber is a good enough mark.
They make good gun-barrels at Springfield, and this thing carries straight, but oh, what a kick it has, with this loose twist at the heel of it! He never was a first-rate shot.
‘I declare, you are beating me! I’ll take a good sight this time.’
Down he crouches, to hold his piece across his knee, but he has entirely forgotten one thing. There are stringent orders out forbidding all firing within the camp limits of this frontier post called Washington City. Mr. Lincoln should have borne them in mind, for he got into difficulties with an order of that kind once. Away back, when he was a captain of militia in the Black Hawk War, he had to wear a wooden sword a whole day for emptying his horse-pistols too near the camp limits.
There they come! There is a short sergeant, or a short corporal, and four or five men of the regiment on guard duty, and they are on a clean run from the avenue, but the President’s protracted squint along that blue barrel must not be interrupted.

The short sergeant, or he may be a short corporal, is beginning to make remarks, and he has forgotten all he learned in Sunday-school.
‘Stop that firing! Stop that firing!’
That is his duty, no doubt, but where did he pick up so many ‘battle words?’
‘Stop that firing—-‘
Bang goes the rifle, just as the sergeant, or corporal, arrives within a few paces and is putting out an eager, angry hand, as if he had an arrest to make. Here comes the fun!
Perhaps Mr. Lincoln heard him, and perhaps not, but his tall, gaunt form shoots up, up, up, uncoiling to its full height, and his smiling face looks down upon the explosive volunteers.
Their faces, especially that of the sergeant, or corporal, look up at his, and all their jaws seem to drop in unison. No word of command is uttered, but they ‘right about face’ in a second of time. Now it is a double-quick, quicker, quicker, as they race back toward the avenue, leaving behind them only a confused, suppressed breath about having ‘cussed Old Abe himself.’
His own laugh, in his semi-silent, peculiar way, is long and hearty, but his only remark is:
‘Well, they might stayed to see the shooting.’1

Only a day after his son Willie’s funeral in February 1862, President Lincoln went down to Treasury Park with Interior Secretary Caleb Smith and inventor W. B. Chace to test a new smoothbore musket that he thought could help Union soldiers. “Chace claimed to have a bullet that would make such smoothbores as good as rifles, and he probably spared Lincoln none of the details as the trio made their way toward the water. Once there, Chace began firing specimens of his bullet in alternation with regulation bullets. A chill wind blew acrid white smoke out of the Potomac,” according to historian Robert V. Bruce. “Standing near by, President Lincoln scanned the leaden river and calculated distances as bullets struck spurts of white from its cold, gray surface; it seemed plain enough to him that the new bullets outdid the old.”2

On August 17, 1863 presidential secretary John Hay attended the testing of a repeating rifle designed by Christopher Spencer. The President was accompanied by his son Robert, Hay, and the inventor. The Secretary of War was invited to participate but he declined–to which the President responded that ‘they do pretty much as they have a mind to over there.” Mr. Lincoln hit the bull-eyes on his second try. As John Hay described the events of August 18 and 19, 1863: “This evening and yesterday evening an hour was spent by the President in shooting with Spencer’s new repeating rifle. A wonderful gun, loading with absolutely contemptible simplicity and ease with seven balls & firing the whole readily & deliberately in less than half a minute. The President made some pretty good shots. Spencer the inventor a quiet little Yankee who sold himself in relentless slavery to his idea for six weary years before it was perfect, did some splendid shooting.” Hay then scratched out: “My shooting was the most lamentably bad. My eyes are gradually failing. I can scarcely see the target two inches wide at thirty yards.”3