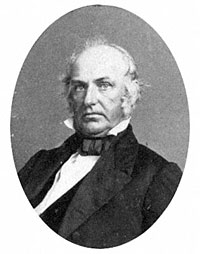 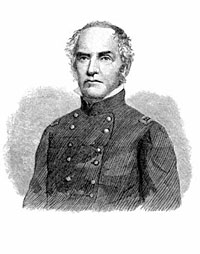 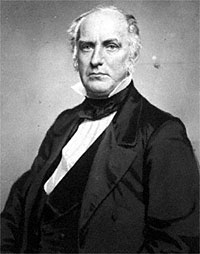 Death of Col. Baker at Ball’s Bluff (near Leesburg, Va.)

Friend of Abraham Lincoln and lawyer who came in second in the 1843 Whig Convention for Congress, Edward D. Baker subsequently took the following Congressional term and Abraham Lincoln took the third. Baker resigned from Congress to serve in the Mexican-American War; he had earlier served in the Black Hawk War. Later, Baker was elected to Congress from another congressional district in northwest Illinois. He helped lead California Republicans before he became a Senator from Oregon (Republican, 1860-61) after less than a year’s residence in the state—through the help of another former Illinoisan, Anson Henry. His oratorical abilities helped carry California and Oregon for Lincoln. Though a new senator, he was one of two Senate escorts for the President-elect on the way to Lincoln’s inauguration in 1861 and it was Baker who introduced “Abraham Lincoln, the President-elect of the United States.”

California Republicans were anxious to receive their political rewards, but Baker who had his own patronage preferences, stood in their way. “They were introduced by Eugene L. Sullivan of San Francisco, former Collector of the Port, to the President soon after his inauguration. They made a holiday afternoon of it,” wrote Lincoln scholar Milton Henry Shutes. About sixty Californians returned later in the month for serious patronage discussions. “On the evening of March 29 about thirty of the Californians met to formulate a protest against the meddling of a Senator from Oregon in political offices of California,” wrote Shute. “Mr. Lincoln, having foreknowledge of the nature of the protest, invited Senator Baker to breakfast and to be present at the meeting. Honorable Joseph A. Nunes, who had visited Lincoln in Springfield, presented a memorial expressing the sentiments of the entire group; James W. Simonton, editor of the San Francisco Bulletin and in later years general manager of the Associated Press, was asked by the anti-Baker faction to read a special protest. The memorial sincerely questioned the right of Senator Baker of Oregon to name appointees for federal offices in California. Mr. Lincoln accepted the memorial and stated that he would file it for consideration.”1

The President’s loyalty to Baker was strong, according to Indiana Congressman George Julian: “Senator Baker..quite naturally claimed the right to be consulted respecting the patronage of his section of the Union.” According to a Cincinnati Commercial reporter, “A highly exciting scene occurred at the White House yesterday morning. About a hundred citizens of California, including many leading Republicans, called on the president to protest against the interference of Senator Baker, of Oregon, with appointments in their state, and his attempt, as they claim, to foist corrupt and broken-down politicians of doubtful antecedents upon the administration and the people of the Golden State. The President had arranged, whether from love of fun or a sense of justice has not yet appeared, that Senator Baker should be present, without the knowledge of the protestants.”2

Julian wrote: “Some of the Californians very unwisely sought the accomplishment of their purpose by assailing both the public and private character of the Oregon Senator, who was an old-time friend of the President. The anger of Mr. Lincoln was kindled instantly, and blazed forth with such vehemence and intensity that everybody present quailed before it. His wrath was simply terrible, as he put his foot down and told the delegation that Senator Baker was his friend; that he would permit no man to assail him in his presence; and that it was not possible for them to accomplish their purpose by any such methods. The result was that the charges against Senator Baker were summarily withdrawn and apologized for, and such a disposition of the offices on the Pacific slope finally made as proved satisfactory to all parties.”3

Baker biographers Harry C. Blair and Rebecca Tarshis wrote: “D. J. Staples, a Californian who had come to Washington for the inauguration, attempted to speak in Baker’s defense. But Lincoln put up his hand and exclaimed: ‘Not a word; not a word. I don’t want to hear a word. I have known Colonel Baker twenty-five years. I have known him better than any of you know him, and I don’t want any defense of him from anyone.'”4

President Lincoln was later quoted in the Sacramento Union as saying: “The paper was an unjust attack upon my dearest personal friend, Ned Baker, who was at that time a member of my family. The delegation did not know what they were talking about when they made him responsible, almost abusively, for what I had done, or proposed to do. They told me that that was my paper to do with as I liked, I could not trust myself to reply in words: I was so angry. That was the whole case.”5 The President could the paper, crumpled and threw it into the fire. Meanwhile, President Lincoln met later the same day with the same delegation and adopted a process by which to make appointments from both contending groups.

Senator Baker liked to make Senate speeches against the Confederacy while wearing his Army uniform. Baker was an unrestrained and impulsive advocate of the Union cause: “I want sudden, bold, forward determined war; and I do not think anybody can conduct war of that kind as well as a Dictator!” Baker told the Senate.sup>6

As an Army colonel, Baker precipitated a major congressional investigation when he was killed at the Battle of Ball’s Bluff on October 22, 1861. He had been visiting with President’s family the day before and relaxing with the President on the White House lawn. According to John Hay, Baker “came down to Washington and settled all his affairs. He went to say farewell to the family of the president. A lady—who in her high position is still gracefully mindful of early friendships—gave him a bouquet of flowers. ‘Very beautiful,’ he said, quietly. ‘These flowers and my memory will wither together.'”7

Baker had been commissioned a general but would have had to resign from the Senate if he had accepted the commission so he opted to continue as a colonel and a Senator. President Lincoln learned of Baker’s death at McClellan’s headquarters from General George B. McClellan. He was so upset that on leaving the headquarters, Mr. Lincoln “almost fell as he stepped into the street.”8

Baker had been a regular confidant of Mr. Lincoln. “Col. E. D. Baker breakfasted with us. His military ardor is all aroused and he is making application to Mr. Lincoln and others here to be appointed Major General of the volunteers—particularly those from the west, and more particularly from Illinois,” wrote Mrs. Lincoln’s cousin, Elizabeth Grimsley on May 8, 1861. She added: “I cannot bear that man. He seems to have such a supreme contempt for lesser intellects, that it quite lowers his own in my estimation. Mary has always admired [him] very much.”9

John Hay recorded how the nation’s top leaders gathered at the headquarter of George B. McClellan to mourn Baker: “A king might have been proud of the simple and hearty eulogies uttered last night in McClellan’s room, where the President, and Seward, and Cameron and M’Clellan, and another, in deep but not unmanly grief, received the heavy news of their friend. Each had his word of earnest sorrow and honest praise. The President mourned the sundering of the dearest of those ties that connected him with the memory of a happier and more careless day.”10 Mr. Lincoln’s son Willie wrote a poem that was published in the Washington National Republican:

So noble and so true;

He fell as a soldier on the field

His face to the sky of blue…

No squeamish notions filled his breast,

The Union was his theme,

‘No surrender and no compromise,’

His day thought and night’s dream

His country has her part to play,

To’rds those he left behind

His widow and his children all—

She must always keep in mind.8

Eventually, Baker’s superior, General Charles Stone was scapegoated for Baker’s death and defeat—although Baker himself was largely responsible for his rash actions. Historian Stephen B. Oates noted that “administration critics saw Ball’s Bluff as symptomatic of incompetent leadership from the White House to the battlefield.”11 Stone was unjustly charged with disloyalty and was jailed for six months. On Stone’s release, he appealed to President Lincoln, but in a White House meeting, Stone said Mr. Lincoln said “that if he told me all he knew about the matter he should not tell me much.”12

Baker’s funeral was held on October 24 at James W. Webb’s home. Mary Lincoln broke funeral convention by wearing a matching lilac-colored dress and gloves. She reacted angrily to criticism, saying: “I wonder if the women of Washington expect me to muffle myself up in mourning for every soldier killed in this great war?” In response to her friend’s suggestion that it might be appropriate to wear black, Mrs. Lincoln responded: “I want the women to mind their own business; I intend to wear what I please.”sup>13

Illinois Congressman Isaac Arnold later recalled, “One evening in the summer of 1863, when the President was living in a cottage at the ‘Soldier’s Home,’ on the heights north of the capital, some one spoke to him of Baker’s burial place in the ‘Lone Mountain Cemetery.’ [near San Francisco] The name seemed to kindle his imagination and touch his heart. He spoke of this ‘Lone Mountain‘ on the shore of the Pacific, as a place of repose, and seemed almost to envy Baker his place of rest. Lincoln then gave a warm and glowing sketch of Baker’s eloquence, full of generous admiration, and showing how he had loved this old friend.”14

Baker was born in England and move to Illinois when he was 14. He served in both the Illinois State House (1837-1838) and State Senate (1840-1844). During his second stint in Congress, Baker became involved in the construction of a railroad across the isthmus of Panama. Although he fell seriously ill in Panama, he eventually decided to move to California, arriving in 1852 to establish a law practice in San Francisco. Baker was charismatic and controversial—a forceful speaker with an unusually good memory for people he had met. He also had a weakness for cards and defending gamblers, which affected his political reputation in San Francisco. After Lincoln’s nomination in 1860, Baker wrote to Lincoln: “The reward that fidelity and courage, find in your person will infuse hope in many sinking bosoms, and new energy in many bold hearts.”15