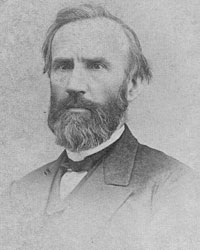 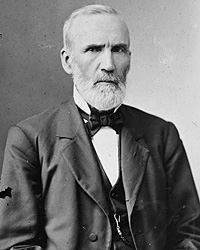 George W. Julian, Congressman from Indiana (Free Soil, 1849-51 and Republican, 1861-71), was the leading House member of Committee on the Conduct of the War. Although he differed with the President on the speed of his anti-slavery measures, Julian (unlike other members of the committee) did not seek to undermine Mr. Lincoln. Julian later reported a meeting that the committee had with the President in early January 1862:

The most striking fact revealed by the discussion which took place was that neither the President nor his advisers seemed to have any definite information respecting the management of the war, or the failure of our forces to make any forward movement. Not a man of them pretended to know anything of General McClellan’s plans. We were greatly surprised to learn that Mr. Lincoln himself did not think he had any right to know, but that, as he was not a military man, it was his duty to defer to General McClellan. Our grand. Armies were ready and eager to march, and the whole country was anxiously waiting some decisive movement; but during the delightful months of October, November and December, they had been kept idle for some reason which no man could explain, but which the President thought could be perfectly accounted for by the General-in-Chief. Secretary [Simon Cameron] said he knew nothing of any plan for a plan for a forward movement. Secretary [William H. Seward] had entire confidence in General McClellan, and thought the demand of the committee for a more vigorous policy uncalled for. The Postmaster-General made no definite avowals, while the other members of the Cabinet said nothing, except Secretary Chase, who very decidedly sympathized with the committee in its desire for some early and decisive movement of our forces. The spectacle seemed to us very disheartening. The testimony of all the commanding generals we had examined showed that our armies had been ready to march for months; that the weather and roads had been most favorable since October; and that the Army of the Potomac was in a fine state of discipline, and nearly two hundred thousand strong, while only about forty thousand men were needed to make Washington perfectly safe. Not a general examined could tell why this vast force had so long been kept idle, or what General McClellan intended to do. The fate of the nation seemed committed to one man called a ‘General-in-Chief,’ who communicated his secrets to no human being, and who had neither age no military experience to justify the extraordinary deference of the President to his wishes. He had repeatedly appeared before the committee, though not yet as a witness, and we could see no evidence of his pre-eminence over other prominent commanders; and it seemed like a betrayal of the country itself to allow him to hold our grand armies for weeks and months in unexplained idleness, on the naked assumption of his superior wisdom. Mr. Wade, as Chairman of the committee, echoed its views in a remarkably bold and vigorous speech, in which he gave a summary of the principal facts which had come to the knowledge of the committee, arraigned General McClellan for the unaccountable tardiness of his movements, and urged upon the Administration, in the most undiplomatic plainness of speech, an immediate and radical change in the policy of the war. But the President and his advisers could not yet be disenchanted, and the conference ended without results.1

A few days later, Julian gave a key speech in Congress in which he said: “When I say this rebellion has its source and life in slavery, I only repeat a simple truism.”2 Historian Bruce Tap wrote of Committee on the Conduct of the War: “The committee’s position on a bipartisan approach to the war could best be summarized by George Julian’s remarks in the House in February 1863. He claimed that the Republican party stood for freedom and that the Democrats, both devotees of Douglas and Breckinridge, stood for slavery. To allow them to direct the war would only entail shameful compromise, argued Julian, who asserted that the war’s disasters stemmed from the administration’s lack of firmness in advocating Republican principles. Instead it had adopted Democratic ideas, and disaster had been the result.”3

Although he often found himself out of sympathy with the President on matters relating to slavery and the war, Julian did sympathize with the pressure of job-seekers on Mr. Lincoln. “I think there has been nothing like it in the history of the Government. A Republican member of Congress could form some idea of the President’s troubles from his own experience. I fled from my home in the latter part of February, in the hope of finding some relief from these importunities; but on reaching Washington I found the business greatly aggravated. The pressure was so great and constant that I could scarcely find time for my meals, or to cross the street, and I was obliged to give my days and nights wholly to the business, hoping in this way I should be able in a little while to finish it; but it constantly increased.”4

In May 1863, Julian in a rare letter complained to President Lincoln about David P. Holloway, the Administration’s commissioner of patents who also published a newspaper in Indiana which was unfriendly to Julian. Julian wrote: “I beg your pardon for saying a word to you on the subject of the patent office & its Commissioner. I am prompted to do this far more by a sense of duty than by any confidence that you will heed what I say. Others, as I learn, not even waiting till the Report of the Congressional committee was printed, have been pleading with you to spare the Commissioner, urgeing that the Report was a partisan or malicious thing &c. My embarrassment is further increased by remembering that before Mr. Holloway was appointed I personally urged you not to appoint him for very good reasons, well known to me, which you felt it your duty to disregard. Still I propose to make a further appeal to you on the subject as now presented for your consideration.”

As I told you over two years ago I know Mr. Holloway intimately & thoroughly, & have known him over twenty five years, haveing resided all that time near him, with the amplest means of knowledge. In the matter of native talents & breadth of thought he is below mediocrity. His education is entirely superficial. His scientific attainments are an unknown quantity. He is notoriously wanting in industry. He had I think but a single claim to the position when appointed, namely, the active help of Hon C. B. Smith, who knew him to be unworthy & unfit. Certain political associations & influences, governed Mr. Smith, very similar to those which prompt Senator Lane, Gov. Morton, & others, in now takeing the side of Mr. Holloway. My knowledge of Mr. Holloway is much more intimate & thorough than that of these gentlemen can be; & when these gentlemen, or any of them, tell you that I have a personal quarrel with Mr. Holloway, & am actuated by personal feeling, I simply say to you that this is wholly untrue. I have never, at any time, had any personal difficulty with him; & if my word is questioned I say to you what I said in writing to you two years ago, that I am ready to make good my assertions by the testimony of the best men in Indiana.
I have spoken of Mr. Holloways lack of qualifications. His integrity is not less wanting. This is perfectly understood here where he is best known, & of itself unfits him for a trust where so many temptations abound.
But what I meant to say is simply this: Five disinterested men, personally strangers to Mr. Holloway, have heard the sworn evidence of competent & well-informed witnesses on both sides, & have made a Report which shows him to have been a disgraceful failure in his position, & that he should be removed, if the public good is to be regarded. You can not disregard this Report, laid before you by order of Congress, without and retain Mr. Holloway, without seriously offending the public & damageing your Administration. Here, where he is best known, nothing else is expected. Every where the patent office is under suspicion, & its usefulness must be greatly crippled, if not destroyed, if Mr. Holloway is retained. I respectfully ask you not to take my word or that of any body else as conclusive in this matter, but to examine both the Report of the Committee & the evidence, & then decide. If you will do this you cannot retain Mr. Holloway longer, & in doing so place weapons in the hands of your enemies to be used against you, while at the same time compeling many of your most earnest friends & supporters to condemn & denounce your action in this matter.5

In 1864 Julian complained about the man’s intention to contest his election. Mr. Lincoln replied that “you can rest assured that [David P. Holloway] shall support you, openly and unconditionally, or lose his head.”6 The opponent did not withdraw so Julian visited Mr. Lincoln a second time “to ask of him decisive measures. I saw in an instant that the President now meant business. He dispatched a messenger at once, asking [Commissioner of Patents Holloway] to report to him forthwith, in person, and in a few days my name was announced in his paper as the Republican candidate, and that of my competitor withdrawn.”7

On the day that President Lincoln died, Julian and other Radical Republicans like Senator Zachariah Chandler and Congressman Henry Winter Davis met with Andrew Johnson. Julian wrote: “I like the radicalism of the members of this caucus, but have not in a long time heard so much profanity. It became intolerably disgusting. Their hostility towards Lincoln’s policy of conciliation and contempt for his weakness were undisguised; and the universal feeling among radical men here is that his death is a god-send.”8

Julian was a strong abolitionist and Radical Republican, who started his political life as a member of the Whig, Free Soil and People’s Parties. He was the 1852 Free Soil candidate for Vice President. He was married to the daughter of the leading House abolitionist, Joshua R. Giddings. He was an attorney, ascetic, intellectual, idealist, proponent of black suffrage and strict moralist who opposed corruption and the nomination of Ulysses S. Grant for President. As a logical extension of his support for black suffrage and civil rights, Julian also supported women’s suffrage. Expelled from the Republican Party in 1872, he joined the Democrats and continued championing political reform.