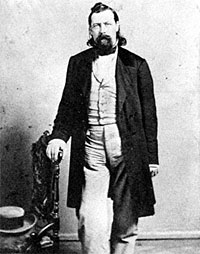 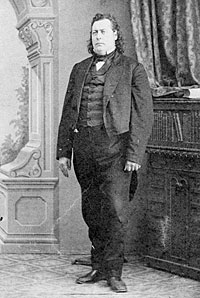 Marshal for the city of Washington and chief of protocol at White House events, Ward Hill Lamon and Lincoln had a working law partnership before Lamon became prosecuting attorney in 1856. He was with President-elect Lincoln when he snuck into Washington in February 1861 to avoid possible violence in Baltimore. Lamon was appointed by President Lincoln as marshal of the District of Colombia in which post he enforced the fugitive Slave Law to the consternation of many Republicans. His pugnaciousness got him in trouble with Congress and got his fees as marshal reduced by congressional action—a law which Lamon unsuccessfully begged the President to veto.

A burly and jovial man with a strong appreciation for liquor, he acted as a self-appointed bodyguard to President Lincoln. General James Harrison Wilson recalled “that while walking out with Ward Lamon, the herculean marshal, that a Confederate sympathizer had stopped them, and, grasping the President’s hand, wrung it till he cried out with pain. As it was not the first time that he had received such greetings under the guise of friendship, nor than Lamon had witnessed it, the latter, with the fist of a gladiator, delivered a blow straight in the ruffian’s face, and felled him to the ground. In sorrow for the poor devil, who hardly knew what had struck him, Lincoln gazed sadly upon his prostrate form and said: “For God’s sake, Ward, give the man a chance! The next time you hit him, hit him with an axe handle!’”1 The President once admonished him: “Hereafter when you have occasion to strike a man, don’t hit him with your fist; strike him with a club or crowbar or something that won’t kill him.”

Lamon’s love of alcohol, arguments, and fights made him a curious compatriot of the President, who valued his musical and physical talents. Ostentatious in dress and demeanor, he was different in almost every way from President Lincoln; nevertheless, he was unswervingly loyal to the President and the President to him. Lamon served as a special representative of the President to Charleston before the fall of Fort Sumter and raised troops after it. Son-in-law of Stephen T. Logan, he had to delay going to Illinois to see his wife in order to act as marshal for the dedication of Gettysburg Cemetery in November 1863.

Lamon had a talent for making enemies. Lincoln scholar Lloyd A. Dunlap wrote: “The conflict continued between Lamon and certain Senators who objected to the imprisonment of slaves and wished to make personal inspection of the jail. Newspaper accounts uncomplimentary to Lamon appeared in the Tribune, and on April 4, 1862, the Grand Jury of the District of Columbia found a bill of indictment against Horace Greeley for ‘malicious libel of public officers,’ in particular, Ward H. Lamon, United States Marshal for the District. The New York Herald, the Tribune’s bitter rival in an age when few journalistic punches were pulled, reported happily that the charges ‘are only the beginning of a series….H. G. is beginning to reap the reward of his labors. He finds that impudent and unwarranted assaults upon honest officials for partisan purposes may not always escape punishment. He will probably ere long pay a compulsory visit to the District, if he should not…fly the country.’”2

Lamon clashed with both civilian and military authorities. Historian Ernest A. McKay wrote: “Late in 1861, a commotion over the frightening condition of the Washington jail, the ‘Blue Jug,’ which Wilson had previously railed against, stirred a number of notables in town. Designed to hold no more than a hundred prisoners, it now contained more than two hundred assorted criminals and fugitive slaves. One man was a free Negro who had been in confinement for more than six months for no good reason, and others had been sent there by disloyal masters for safekeeping, until the war was over. One piece of property, an old woman, belonged to a former Senator from Florida. Incensed by these conditions, Wilson introduced a resolution that all laws related to the arrest of fugitives from services, and all other laws relating to the colored people in the District be referred to the Committee on the District of Columbia and that they be instructed to consider the expediency of abolishing slavery in the District with compensation to loyal owners of slaves. It did not pass, but the shocking publicity enabled Secretary of State Seward to issue and order to the marshal which forbade holding persons not charged with an crime or misdemeanor.”3

When Lamon sung some sad songs as President Lincoln toured the site of the Antietam battle in early October 1862, newspapers distorted the events into presidential disrespect for the death. As U.S. marshal, he enforced runaway slave laws and clashed with more-abolitionist-minded officials. In his memoirs, Lamon wrote:

The Confiscation Act, which gave liberty to all slaves that had been employed by the rebels for insurrectionary purposes, had gone into effect in the month of August, 1861. The military governor of the District assumed that by virtue of this law all slaves that came into the District from whatever section had been thus employed, and consequently were free, and it became his duty to give them military protection as free persons.
This state of things caused a fearful responsibility to rest upon the shoulders of the civil executive authorities. The President gave me private instructions to execute the laws until Congress modified or repealed them. ‘In doing this,’ Mr. Lincoln said, ‘you will receive much adverse criticism and a good deal of downright abuse from members of Congress. This is certain to come, but it will be not so much intended for you as for me; as our friend Senator Hale, the other day, said in the Senate, ‘We must not strike too high nor too low, but we must strike between wind and water; the marshal is the man to hit.’ And I say, we shall have to stand it whatever they send.’4

Lamon took a personal interest and responsibility for the President’s safety—from the time he accompanied the President-elect on his surreptitious entry into Washington via train from Harrisburg to Philadelphia to Baltimore and thence to the capital. “Hill,” as the President called him, was in charge of the Administration’s preparations for the dedication of the Gettysburg battlefield. He also was the unappointed guardian of the President’s safety, sometimes lying down outside the President’s bedroom door at night and on other occasions admonishing the President for his failure to concern himself with safety. One election night, November 8, 1864, according to John Hay, Lamon’s concern led him to “lay down at the President’s door, passing the night in that attitude of touching and dumb fidelity, with a small arsenal of pistols and Bowie knives around him. In the morning he went away…before I or the President were [sic] awake.”5

He shared with Commissioner of Buildings Benjamin B. French responsibility for introducing people to the President and his wife at White House receptions. It helped that Lamon where he could keep an eye on any suspicious person who came through the door. In December 1864, Lamon wrote the President:

“I regret that you do not appreciate what I have repeatedly said to you in regard to the proper police arrangements connected with your household and your own personal safety. You are in danger. I have nothing to ask, and I flatter myself that you will at least believe that I am honest. If, however, you have been impressed differently, do me and the country the justice to dispose at once of all suspected officers, and accept my resignation of the marshalship, which is hereby tendered. I will give you further reasons which have impelled me to this course. To-night, as you have done on several previous occasions, you went unattended to the theatre. When I say unattended, I mean that you went alone with Charles Sumner and a foreign minister, neither of whom could defend himself against an assault from any able-bodied woman in this city. And you know, or ought to know, that your life is sought after, and will be taken unless you and your friends are cautious for you have many enemies within our lines. You certainly know that I have provided men at your mansion to perform all necessary police duty, and I am always ready myself to perform any duty that will properly conduce to your interest or your safety.
God knows that I am unselfish in this matter; and I do think that I have played low comedy long enough, and at my time of life I think I ought at least to attempt to play star engagements.6

Lamon returned to the practice of law after the War and in 1872 published a controversial biography of Lincoln from William Herndon’s collected research notes, The Life of Abraham Lincoln from his Birth to his Inauguration as President. (It was ghost-written by Chauncey F. Black.)