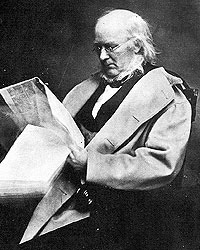 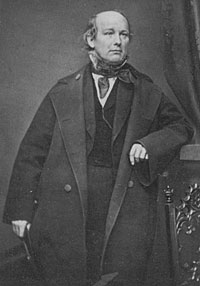 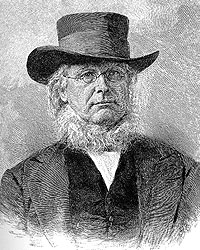 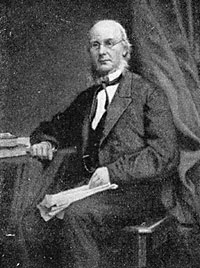 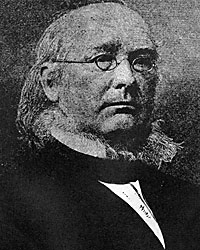 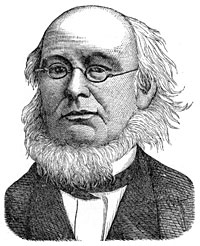 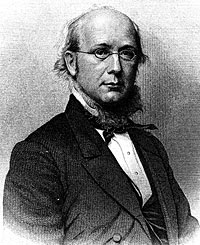 Horace Greeley was the Editor of the New York Tribune, which he founded in 1841 after earlier founding a weekly newspaper (The Jeffersonian) at the request of Thurlow Weed. An eccentric social reformer and erratic political tactician, he pushed Illinois Republicans to back Stephen Douglas in 1858. Later during the Civil War, he alternately urged strong prosecution of the Union war effort and pursuit of peace negotiations. Although Greeley was an early New York ally of Weed and William Seward, he became their implacable foe and helped doom Seward’s presidential prospects in 1860. Greeley was passionate and impatient. He was known as a strong opponent of slavery, a knowledgeable expert on the protective tariff, and a strong proponent of western expansion.

After Lincoln’s election, he argued in favor of letting the South secede. Then, he and the New York Tribune urged “On to Richmond” before the Battle of Bull Run in July 1861. After the battle, Greeley’s tone changed dramatically. “This is my seventh sleepless night—yours, too, doubtless, yet I think I shall not die, because I have no right to die,” Greeley wrote President Lincoln on July 29, 1861. “Can the Rebels be beaten, after all that has occurred, and in view of the actual state of feeling caused by our late awful disaster?….And if they cannot be beaten—if our recent disaster’s fatal—do not feat to sacrifice yourself to your country. If the Rebels are not to be beaten…then every drop of blood henceforth shed in this quarrel will be wantonly, wickedly shed….”1

On January 3, 1862, Greeley’s lecture at the Smithsonian Institution was attended by President Lincoln . Greeley looked at the President as he declared that abolition of slavery was the “one sole purpose of the war.” Congressman George Julian noted that Mr. Lincoln “greatly admired” the lecture: “I sat by his side, and at the conclusion of the discourse he said to me: ‘That address is full of good thoughts, and I would like to take the manuscript home with me and carefully read it over some Sunday.'”2 However, the Tribune’s Washington correspondent, Homer Byington recalled the President asking him: “What in the world is the matter with Uncle Horace? Why can’t he restrain himself and wait a little while?”3

In 1862, he pressed the President to abolish slavery as a way to end the war. After Greeley wrote Congressmen Schuyler Colfax a letter on March 16, 1862 offering his support for an emancipation measure introduced by President Lincoln, Mr. Lincoln replied: on March 24: “I am grateful for the generous sentiments and purposes expressed towards the administration. Of course I am anxious to see the policy proposed in the late special message, go forward; but you have advocated it from the first, so that I need to say little to you on the subject. If I were to suggest anything it would be that as the North are already for the measure, we should urge it persuasively, and not menacingly, upon the South. I am little uneasy about the abolishment of slavery in this District, not but I would be glad to see it abolished, but as to the time and manner of doing it. If some one or more of the border-states would move fast, should greatly prefer it; but if this can not be in a reasonable time, I would like the bill to have the three main features—gradual—compensation—and vote of the people—I do not talk to members of congress on the subject, except when they ask me. I am not prepared to make any suggestion about confiscation. I may drop you a line hereafter.”4

Although Republican, he often differed with President Lincoln, sought an alternative candidate in 1864, and favored a compromise end to War. At one point in July 1864, Mr. Lincoln urged Greeley into personally conducting a peace mission to the Canadian border and was then embarrassed when the mission failed dismally. Mr. Lincoln told an August 1864 Cabinet meeting that Greeley was like an “old shoe—good for nothing now, whatever he has been.”6 Greeley visited the White House less than some other prominent Republican editors, but his correspondence to and from the President was very important in defining public policy on the war and emancipation.

Mr. Lincoln himself tried to maintain a cordial relationship but he drew a line in his relationship with newspaper editors, particularly with the critical editor of the New York Herald, James Gordon Bennett. Urged to invited Bennett to the White House so he could be “noticed,” President Lincoln declined, saying: “I understand… Bennett has made a great deal of money, some say not very properly; now he wants me to make him respectable. I have never invited Mr. Bennett or Mr. Greely [sic] here—I shall not therefore, especially Mr. Benett.”7

Indeed on January 6, 1863, he thanked President Lincoln for his help in dismissing a libel suit against Greeley filed by United States Marshal Ward Hill Lamon. “I thank you heartily for your interposition in the libel case though I should not have objected to trying it here. I can’t spare the time and money required for such a trial in Washington,” Greeley wrote the President. Nevertheless the lawsuit “has saved me seven journeys to Washington on other folks’ business—business to me most irksome, yet which I could not have refused without offense, yet which I could not be expected to undertake at the expense of a month or so in your crowded and not too cleanly jail. I have thus kept away from Washington a full year, and feel morally and every way the better therefore.”8

Historian Harry J. Maihafer observed: “Greeley believed that his opinions were everyone else’s and that he had almost an obligation to set Lincoln straight. In his mind, theirs was a special relationship, one well analyzed by the remarkable blind scholar James Trietsch, who wrote: ‘Fundamentally a pacifist, Horace Greeley was mentally overcome by the internal conflict, by the length of it and by the bloody cost of it. He endeavored to guide Lincoln into what he believed was a pathway to peace. But his advice, was as erratic as his mind was unstable; influence upon Lincoln, who soon fathomed Greeley’s unreliability, was therefore negligible.'”9

In July 1864, Greeley pressured Lincoln to engage in some spurious peace negotiations. Lincoln deftly maneuvered Greeley to take the brunt of the responsibility for the talks, which quickly broke down. Historan Glyndon G. Van Deusen wrote: “Greeley took a public position in regard to the negotiation that substantially bore out the charges of deceit leveled against Lincoln by the Confederates. The Tribune’s editor was thereupon castigated by Bryant and Raymond, with Bennett taking delighted digs at ‘poor Greeley,’ that ‘nincompoop without genius,’ who was lower than ‘Colorado’ Jewett. Stung into mad unreason by this torment, Greeley backed and filled, now declaring that Lincoln’s peace terms had been ‘just right,’ two days later criticizing Lincoln for not going on with the negotiations regardless of his preliminary conditions. As to whether he, himself, regarded the abolition of slavery as prerequisite to peace, Greeley hedged, explained and tergiversated until no one could tell where he did stand.”10 Historian Michael Burlingame wrote: “When James Ashley protested Greeley’s mission, Lincoln said: ‘Don’t worry; nothing will come of it.’ The Tribune editor, said Lincoln, ‘means right’ but ‘makes me almost as much trouble as the whole Southern Confederacy.”11

President Lincoln’s ability to manipulate Greeley was shown by one story about how Greeley’s political loyalty in 1864 was eventually assured. Greeley biographer William Harlan Hale wrote:

If the narrative of George G. Hoskins, an upstate New York politician who saw both men, is to be believed, the president set out to appease the editor in the one way that Greeley would surely find irresistible. Hoskins had been in to see Greeley and had found him generally out of sorts with Lincoln—so much so, in fact, that the editor had flatly declined a presidential invitation to come down to Washington for a talk. Then Hoskins went on to see Lincoln himself, hoping in some way to repair the breach. According to Hoskins’ account, the President took him by surprise and ‘began at once to express his lifelong admiration of Mr. Greeley, asserting..that he regarded him as the ablest editor in the United States, if not in the world, and believed that he exerted more influence in the country than any other man, not excepting the President.’ Then Lincoln proceeded to call Greeley ‘the equal if not the superior of Benjamin Franklin’—a remark which led the President to say that he had long had in mind offering to Greeley the very post which Benjamin Franklin had first held, namely that of Postmaster General.
Hoskins, amazed by all this, asked the president whether he meant it seriously. Of course, said Lincoln; and he instructed Hoskins to go back and convey the Cabinet offer to Greeley in his name as a ‘solemn promise’ to be fulfilled after his reelection.
Hoskins took the next train to New York and delivered the offer to Greeley that same night. ‘Do you believe that lie? Greeley asked him in his queasy voice; ‘I don’t.’
“I will stake my life upon it,’ said Hoskins.
Greeley sat and thought awhile. He said nothing, but next morning the Tribune came out solidly for Lincoln for President.” 12

Like most New York politicians, it was not simply policy which concerned Greeley. “Greeley’s concern with the mundane aspects of politics—the appointments and promotions—continued throughout Lincoln’s administration,” wrote historian Lloyd A. Dunlap. ” Shortly after the [March 1861] inauguration, Greeley, with three other prominent New York Republicans, wrote to Lincoln, urging that the post of Surveyor of the Port at New York City be given to one in ‘full accord and sympathy with the collector already appointed.’ The Greeley branch of the party, selecting the Custom House offices as a sort of consolation prize in return for the ascendancy of the Seward-Weed influence in the state, had secured the collectorship for Hiram Barney, and were anxious that Benjamin F. Camp, also in the Greeley Faction, be made Surveyor. Lincoln came directly to the point in the endorsement he wrote on the envelope: ‘Greeley [sic], Opdycke [sic], Field & Wadsworth, in favor of having the two big puddings on the same side of the board.'”13

Greeley served briefly in Congress in 1848, winning strong enmity from his colleagues as a result of the Tribune’s series exposing account padding—including that of Congressman Lincoln. His failure to get a statewide Whig nomination in 1854 led to his split with Weed and Seward. In 1861, they secured the nomination of Ira Harris to the U.S. Senate over Greeley. After the war, Greeley was a co-signer for Jefferson Davis’s bail. Greeley lost the race for State Comptroller in 1869 before he was nominated for President against Ulysses S. Grant in 1872 as a Liberal Republican-Democrat. He lost the election, his newspaper job, his wife and his own life— all with a month of that election. In addition to his writing for newspapers and Whig Party periodicals, Greeley authored several books including Glances at Europe and The Civil War: The American Conflict.